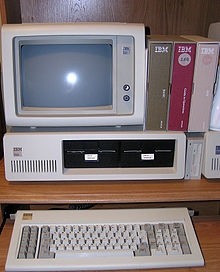 Joe Wallace’s FZ post on January 4 (and the Dave Allen post it linked to) offered some good, common sense advice about early adoption of new technology. The consensus was to wait for later versions of new devices like the iPad.

Actually, the Kaypro is long gone. (Remember the Simpsons episode where Marge recounts how they got their Kaypro after someone threw it off an expressway overpass? That was me up on the overpass.) But I do have a two-year-old laptop that by today’s standards is already considered clunky. I’ll wait to replace it though. In the meantime, I’ve taken to picking up a legal pad and a smooth-flowing pen more often. It brings back fond memories of the times I would sit up late into the night with paper and pen, writing things out in long hand before moving to the typewriter to type them up. Later, I bought one of the first IBM PCs. No hard drive…just two 5.25″ floppy drives. One to run Wordstar, the other to save my files. And one of those lovely green-on-black monochrome monitors. For a whopping $2,500! And that was in 1985 dollars. I used that thing for almost 10 years before finally moving to something with a hard drive. (If nothing else, the original IBM PCs were durable. I still use it to crush rocks.)

Twenty-six years and countless PCs and laptops down the line from that first PC, I now sit here with my wireless keyboard and trackball mouse, creating literary masterpieces (and the occasional blog post) while trying to maintain proper wrist position so I can ward off carpel tunnel syndrome. I also try to look away from my giant color monitor periodically so I can retain just enough eyesight to still see more than a blurry image of myself in the mirror in the morning. More reasons to stick to pen and paper.

So here’s my suggestion for today: Put aside your laptops and iPads for a little while. Try a non-electronic writing instrument for a change of pace. Personally, I’m digging the very economical Signo pen from Uniball and Second Nature recycled legal pads from Tops. Stop by sometime and I’ll give you a preview of next week’s blog post. In long hand.

Mike O’Mary is founder Dream of Things and of the Note Project, a campaign to make the world a million times better by inspiring participants to write 1 million notes of appreciation. Coming March 20, 2011.