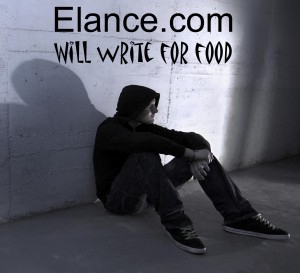 In the end, I didn’t go with the lowest bidder. Nor did I go with an overseas bidder, although there were many. I went with U.S. providers, partly because of my comfort level, but also because I found that I could hire a U.S. freelancer and still spend way less than I had anticipated. In fact, at the end of the graphic design job, I gave the designer a bonus because I couldn’t believe how much work she did for the price she had quoted me. And that’s where my mixed feelings come in…

From a client perspective, Elance.com seems like a good idea. But from a freelancer’s perspective, I’m not so sure. On a site like Elance.com, you get so much competition from all around the world – including from people in countries with much lower costs of living – that it seems to me the main result for U.S. freelancers is going to be to drive down prices.

To wit: There are 115,912 “Writing and translation specialists” on Elance.com. Fewer than half (56,542) are in the United States. If you wind up competing with all of those people solely on price, you are going to end up getting less than $10 per hour for your work. That’s less than the U.S. poverty level of $22,350 per year for a family of four. Of course, you’re not going to compete solely on price. You’re going to tout the quality of your work and your experience and your expertise and maybe also the fact that English is your native language – and even when you’re competing against freelancers from the UK or Australia or India who also have English as their native language, you speak/write/edit American English, which is what your American clients are probably going to want. So maybe with all of that going for you, you could demand a premium well above $10 per hour…maybe as much as $20-25 per hour. That’s still not much for somebody who is doing high-quality freelance writing, and you’re not going to have much, if anything, left at the end of the year to put in your IRA.

On the other hand, there is “Words You Want.” Words You Want is one of the 115,912 Writing and translation specialists on Elance.com. In fact, she is the first one that pops up when you search that category. In her profile, she says that she has earned more than $700,000 on Elance.com. She also says she has been in business since 2006. That means she’s averaging $140,000 per year. Not bad. But that would mean that she’s billing 2,000 hours per year at $70 per hour. From what I’ve seen on Elance.com, it would be pretty remarkable to average that kind of hourly rate. Maybe she’s actually working her butt off at a much lower rate and putting in 60-80 hours per week to make her $140,000 per year. If so, my hat is off to her. In any case, I think $140,000 per year via Elance.com jobs is the exception, not the rule. Or worse, it might be a fiction.

Based on all of the above, I have to believe that Elance.com is NOT a good thing for freelance writers. But that’s my opinion. What about you? What experiences have you had getting freelance/contract work through sites like Elance.com – or freelancer.com or other similar sites? Any sites you would recommend to other freelancers? Any you would avoid?

Mike O’Mary is founder of the Note Project, a campaign to make the world a million times better by encouraging 1 million people to share appreciation, and of Dream of Things, a book publisher and online book store.