by Diane Holmes, Marketing-Zone: Marketing Yourself and Your Book

I bet you need a brand example…

A couple weeks ago, I taught a workshop on Author Branding, and I needed an example that all the writers would immediately understand.  Something on the scale of “one example to rule them all.”

In other words, I wanted to find an example that we could hold up and say, “That!  Do that!”

The New Old Spice Guy:  It all started when Old Spice, maker of a men’s deodorant and fragrance since the 1930’s, decided to revitalize its brand.

Over the years, they’d communicated to their brand’s outdoorsy, rugged, male audience by teaming the product with a logo of a sailing ship and often using a crusty, old seafarer as a spokesman.  Hey, it worked at the time.

But now, they needed a new face, a new message, and a new relationships with consumers who didn’t related to crusty old men as sexy.

RESULT: This amazing, innovative re-branding of “how to think about Old Spice,” not only did the trick, it also went viral.

Instantly, America got the brand, was wildly delighted by the creativity of the tongue-in-cheek single take, and told all their friends.

Old Brand = Old, crusty sea captain, who smells of sea breeze and lives a life on his own (extremely dated) terms (lonely).

New Brand = The man you HOPE your man smalls like (looks like, acts like, woos like…).  He’s drop-dead gorgeous, a guy who can do everything with ease.  Plus he has a sly wit, cheeky over-confidence, and good-hearted charm.

He winks at the audience (because they’re in on it) and is clever yet silly in a manly-man way.  He gets the joke that he’s playing on being sexy yet is still sexy.  He’s on your side and wants to help you and your man.  He’s practically noble in his desire to share his secret.  Men want to be him.  Woman want to date him.  He’s the best of all of us.

From here on out, when people talk about Old  Spice, they will forever think of New Old Spice Guy, this amazing monologue, and the jaw-dropping single take of this commercial.

But that’s only part of the story.

Who is Isaiah Mustafa? 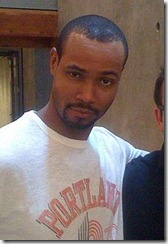 Isaiah Mustafa was relatively new to acting when he took this role.  He wasn’t a household name for most of us.  But Isaiah was smart enough to embrace this role and make it his own.

It started when Isaiah had been given the script and was practicing his lines.

Despite his sharply scripted monologue, the smug, over-the-top attitude of Mustafa’s character wasn’t planned. The day before the shoot, Mustafa called to chat with a pal from his days at Arizona State University, Denver Broncos quarterback Jake Plummer. When Plummer didn’t answer, Mustafa decided to leave a rehearsal of the commercial’s script on his friend’s answering machine.

“I just did it for him, and I did it extra big, and then when I hung up, I thought, ‘Maybe I should try it that way and see if they like it,’ ” Mustafa told the Times.

He added a piece of himself , his sense of humor, to the ad.

Here are a few a random facts about Isaiah:

Folks, Isaiah IS the New Old Spice Guy.  He can do everything, speak eloquently, laugh at being a manly man, and live life LARGE.

Because his real life has the same hallmarks as New Old Spice Guy, it has become his personal BRAND as well.

Watch this small-venue interview with Isaiah.  While it’s still toned down from his over-the-top character, he’s pretty fast on his feet, accomplished, and happy to play along with the interviewer (who has a crush).

So, this is a perfect example of how a brand and a person can be thought of in one completely-charmed-please-fan-me breath.

One of the fabulous videos of a recent Internet ad campaign where Fabio, Romance Cover Model, challenges New Old Spice Guy to “Mano a Mano en el Bano!” as Fabio tries to take over as the role of…Old Spice Guy.

Diane writes two columns for Freelance-Zone: Fiction-Zone: Leaps in Fiction Mastery and Marketing-Zone:Marketing-Zone: Marketing Yourself and Your Book.

She’s the Founder and Chief Alchemist of Pitch University – “Learn to pitch your book from the AGENTS and EDITORS who make their living at it. Learn. Pitch. Sell.”

2 thoughts on “Author Branding: “The Brand Your Brand Could Smell Like.””