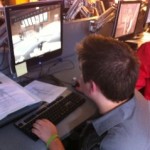 Over the summer, I decided I wasn’t busy enough and enrolled in the Recording Arts for Film program at Tribeca Flashpoint Media Academy. The program began this week with orientation and on Day Two, we got right into things with a team-building exercise designed to help people understand just what they are getting into at the schoolhouse.

I am certainly not the only non-traditional (read, “older”) student there, but as we divided up into teams it was clear that the experienced students were spread around the room, giving us ample opportunity to make choices about how to proceed with the first team building exercise–a video project that required a quick bit of writing, some video capture, sound design and editing.

I’ve got boatloads of experience in these areas, but rather than dive right in and start organizing the team I was assigned to, I thought it might be slightly less egotistical–and a lot more educational–to simply wait for someone else to volunteer to take charge, take direction from them, and watch the team dynamic evolve.

And did it ever! We made some of the classic newcomer mistakes–letting one person take the lead (not me) for writing, directing, and producing and then sorting out the mayhem when that started to go awry. What was really great was watching the youngest team members–some right out of high school–begin to find their leadership legs when it was clear that nobody was going to jump in to save the day. (Not that they expected someone to do that, mind you….)

If a more experienced student had herded the group down the “right” path, none of that would have gotten to happen. It would have been easy to say, “You do THAT because you have experience with THIS, and you go take care of A and B in the script while WE undo problem C and D.”

Instead, the group evolved and team leadership roles developed organically–you could literally see the changes in attitude start to happen as the problems got fixed, the issues worked out, and the players finding their collaborative legs.

When you’re on a freelance creative team with many newcomers and new-to-the-field people, there’s a time to steer the ship with more experienced hands, and there’s a time to let people stretch beyond their comfort zones. The trick is knowing which is which. Leading a team of creatives–freelance or not–means finding the balance for the benefit of both the project and those working it.

Tribeca is a media arts academy, and while some might not see the relevance in any of this to the freelance life, I should point out that they tell you in orientation that a great many jobs waiting for those who graduate this two-year program are freelance by nature rather than staff positions. So for me, at least, this adds a whole new dimension to my work and my writing about the freelance life. Expect more multi-media musings from me here as they relate to freelance work, the coursework I’m involved with at Tribeca, and etc.