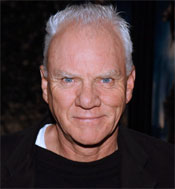 When I’m not working with my freelance clients I also write about and sell vinyl, especially genre film soundtracks from the 60s and 70s.

Because of these obsessions, I find myself doing conventions about six times a year, where many well-known names set up to sign autographs and discuss the movies they’ve made. At a recent show, I met Malcolm McDowell, star of Stanley Kubrick’s A Clockwork Orange and many other well-known titles. While we were chatting about his more obscure output, I quizzed him about an 80s comedy called Get Crazy.

Not a typical part for McDowell. He was offered it, and told me while he read the script on a beach somewhere, he couldn’t find a single funny line–he hated the whole idea of doing the film. His character was a has-been rock star named Reggie Wanker. The character had to sing and perform wearing a huge white codpiece and have nutty backstage escapades.

So he mulled it over, and decided in the end to accept the part–why say no and alienate a director or producer? But McDowell still didn’t want to do the film, so he asked for a fee he was sure would never get approved.

Sure enough, the producers took one look at his fee and decided to go with someone else.

According to McDowell, the film company decided it would be a good idea to hire a professional singer to play the part instead. Except the singer didn’t work out, and McDowell suddenly found himself hired–at his original fee.

What freelancers can take away from Malcolm McDowell’s story is this: sometimes saying no is a bad idea–you have to trust your instincts and pick your battles. Does your freelancer’s survival instinct tell you that you’d be miserable doing a given project, but turning it down could hurt your chances for more desirable work from that client later? A ‘yes’ can be as good as a ‘no’ if you play it right.

BUT by the same token, if you DO say yes and use what I now call “The McDowell Strategy”, you could well end up having to do the job you don’t want to do anyway. Does that higher fee negate the misery you’ll experience?

In my own freelance life, the money has NOT been worth the misery when I found myself trapped in bad projects with little direction or competence at the helm. I am very spoiled. A great majority of my freelance work–especially my current clients–have been wonderful. The few instances where I felt trapped, I wrapped up the projects and moved on, slightly richer but feeling more foolish for the wear.

I say yes very carefully now, but there have been one or two cases where the McDowell strategy has served me well–but I took a very long look at the angles before using it. It hasn’t backfired on me yet, but that’s probably only because I use it VERY sparingly. But when you need it, that strategy is a tool that can work well in your favor.