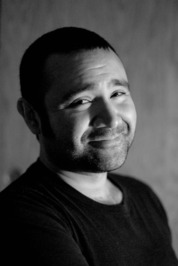 Victor David Giron runs Curbside Splendor, an indie publisher based in Chicago. The Curbside Splendor mission statement says, “We publish literary fiction and poetry based in contemporary urban (and sometimes sub-urban) settings.  Our goal is to support the independent publishing process and to promote urban-themed writing.”

We caught up with Victor David Giron to ask about writing fiction in general, his book Sophomoric Philosophy, and the struggle a new fiction writer faces when trying to find a voice.

FZ: First, a bit of background–when did you start writing professionally and how did you decide to commit to your first book?

Victor David Giron: I’m a CPA and have worked for professional services firms and corporations since I graduated from the University of Illinois at Urbana-Champaign in 1996.  People associate accounting with numbers and spreadsheets, which for the most part is true, except that the field of accounting that I specialize in involves researching accounting rules and writing about how they apply to real life business situations.

So I’ve been writing for my core profession all these years, and in that sense I’ve been writing professionally for a while.  However, I’ve wanted to write a novel for as long I can remember reading them.  During my twenties I experimented with novel ideas, some that progressed a bit, but all that eventually died.  I felt like I was forcing ideas that just were not flowing.  Around my 30th birthday, as a way to pass away time while in hotel rooms on business trips, or stuck at an airport, I began to write memories from high school parties and relationships.  I’ve never been one to keep a journal, so for me this was my first time writing down personal memories.

FZ: Sophomoric Philosophy is pretty complex from a conceptual standpoint. You’ve got a lot going on with culture issues, the war between art and commerce with the main character, plus the entanglements with substances, sex and growing up. What made you decide to go this route?

VDG: Sophomoric Philosophy is about a guy named Alex Lopez that very much like me is an accountant but has always wanted to do something more creative with his life, something more meaningful.   He has a lot of good ideas, instincts, but can’t seem to focus on any one of them, and too easily falls prey to partying, girls, and sex, and therefore never seems to move beyond just the idea phase.

There are glimpses in the novel that perhaps he’s making progress, but you’re never quite sure.  I wanted the novel to be an explosion of all these themes, especially as it’s told in the first person narrative by the character.  I wanted the reader to get a feel of all the tension that comes from being consumed with ideas but not being able to follow through.

But the book is also a celebration of these things, of getting immersed in being in the moment and loving things like music and partying, having a sexual connection with someone, amid the constant stream of information bombardments that modern culture inflicts on us.

I wanted the book it to be as real as possible, and easily relatable to people that don’t necessarily read books or write.  I want the reader to feel as confused and awkward as Alex does.  Based on feedback I think I’ve succeeded.  As a writer, I also like to think that this first novel hits on a lot of topics that I’m interested in pursuing in greater detail with my future work.  For example, my next novel White Hallways will be focused primarily on memory and sibling relationships, along with further pursuing the Mexican-American experience that Sophomoric Philosophy touches on.

FZ:So many new writers try tackling genre fiction and wind up forcing their literary voice into a mold it’s not quite ready or able to fit. Did you have struggles in that department?

VDG: Earlier I mentioned that before Sophomoric Philosophy I had many failed attempts at writing a novel. Most of these were some sort of genre fiction that, especially in hindsight, I found frustrating because my writing sounded like someone I totally couldn’t relate to.  That’s why when I settled in on using my own personal experiences as the basis for the novel, the writing really began to flow because it felt natural and it allowed me to, over time, get better and creative with what I was doing.

One of the things I’m most proud of the book is that the voice is strong, consistent, and comes across exactly how I wanted it to.  I taught myself how to write fiction with Sophomoric Philosophy and when I read over it now I can kind of see how I improved my writing over the course of it.

The three chapters titled “On Being Mexican-American” Parts I, II, and III, were one of the last few I wrote, at the suggestion of my editor to give more emphasis on this theme of struggling with ethnicity, and I think they’re probably the best from a pure writing perspective.

We’ll continue our discussion with Victor David Giron in part two of our interview. You can read the latest fiction and poetry at CurbsideSplendor.com.