We’re taking a time-0ut and wishing all our readers a very happy New Year! May 2013 bring you closer to all your ultimate writing goals. It has been an honor to be a part of your journey. Keep an eye out for more from our wonderful columnists and a guest post or two that might just surprise you…

We look forward to serving you in the coming year and hope you have a happy, safe celebration!

We’ll be on a reduced schedule for the remainder of the year, but we’ll be back at it in 2013. We want to thank all of our readers and contributors–we could not do it without you! Happy holidays from Freelance-Zone.com and we look forward to a new year. Have a safe holiday and remember those in uniform who can’t be home–there are plenty of military members (some of whom are writers, bloggers or aspire to be) deployed or stationed overseas, celebrating with friends and co-workers there. We salute you!

This means reaching out to people to touch base, getting my contacts organized, sending out some new feelers and other strategies designed to both keep me working and find new jobs. Here are some great things you can do to stay on top of things for 2013:

Do you have any good tactics for marketing yourself during the holidays? If so, we’d love to hear from you! 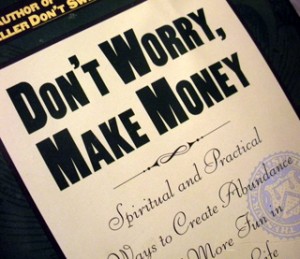 As a dedicated freelancer and creature of habit, I typically begin each workday at my desk. Regardless of whether I have a project or an assignment, I can always find something constructive to do. However, last spring, after a routine physical and a few lab tests, my doctor informed me that I was woefully deficient in Vitamin D. Wary of taking the 50,000 unit megadose he prescribed, I decided instead to begin each morning sunning myself for an hour on my balcony overlooking a creek that runs through a shady ravine.

To pass the time, I began reading the books that have been patiently waiting on my bookshelves for years while I worked diligently away, growing more Vitamin D deficient with each passing day. At first, I experienced pangs of guilt as my mind strayed toward my vacant desk. But it wasn’t long before I found myself craving that sunny hour on my balcony each morning, indulging in the long-forgotten luxury of reading purely for pleasure.

My summer reading list began with a folksy Southern cookbook called Screen Doors and Sweet Tea (a Christmas gift from my brother Nolan); followed by Inspector Saito’s Small Satori, a collection of Japanese detective stories. Next came the classic tale of Zorba the Greek, and believe it or not…all 564 pages of Alain Danielou’s Complete Kama Sutra.

And then along came Don’t Worry, Make Money by Richard Carlson, a boutique-sized book comprised of 100 little essays on various business-related tips, many of which are based on social pleasantries and old-fashioned common sense. One in particular however, an idea described in Essay Number 22, has since become one of the most effective productivity tools in my repertoire. It’s called: The Critical Inch.

The concept behind this technique is to step back from the big picture and focus instead on the minutiae. As with any goal or project, it’s often the small things that eventually add up to its completion; and at any given moment, there’s usually one piece of the puzzle causing a log jam in the flow of productivity. Whether it’s making a crucial phone call you’ve been procrastinating, running an errand to buy supplies and sundries, or even something as simple as tidying up your workspace, there’s always one small step, that Critical Inch, which is, in reality, a giant leap toward achieving your goal.

On the day that I read Richard Carlson’s Essay Number 22, once my sun-drenched reading hour was up, I marched straight into my office and began making lists of all the tasks, both big and small, that would get me to the finish line of each of the projects I had in development. As a result, I’m pleased to say that, thanks to Critical Inch thinking, I’m now on the threshold of launching a line of boutique spice blends, and finally publishing a children’s book that has been 20 years in the making. 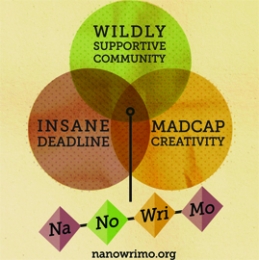 November is National Novel Writing Month and it gives you a great excuse to drop everything else and focus on your writing all month. If you are not familiar with NaNoWriMo, there’s loads of information on their site (http://www.nanowrimo.org).

You can participate as little or as much as you want. There really are no rules. A serious writer is not likely to think of writing a novel in a month, but being focused on writing and having a goal can be the difference between wanting to write and actually having something to show for it at the end of November.

By signing up (free) at NANOWRIMO, you’ll be able to log in daily and track the words you’ve written. And the motivation is nearly irresistible. You’re accountable only to yourself, and by logging in to track your words, you are setting a goal for yourself to at least try to write every day for the whole month.  You write on your own computer or in a notebook, not online, so your work stays private.

Thousands of participants have enjoyed this worldwide event, making it great fun. Sign up, log in when you write, and the system tracks your word count toward your goal.

You have nothing to lose. If you’re a past participant in NaNoWriMo you already know it does one great thing:

Nice way to accomplish something special this year, and a great reason to celebrate the holidays after November’s achievements stack up on your desk or laptop.

An important part of writing is making sure that what you say is consistent. You don’t want to say one thing when you mean another.

Here’s an example: “I don’t plan on coming back, at least not for a while,” Jonathan said aloud, thinking to himself silently. That’s an obvious no-no. It’s either one or the other – you say something out loud or you think it to yourself; you don’t do both.

What other problems are there with that sentence? Redundancy. Two redundancies, in fact. It’s not necessary to say “thinking to himself” because who else was he thinking to? You could just say, “Jonathan thought.” And there is no need to say, “Thinking to himself silently” because all thoughts are silent by definition.

Usually when we make these kinds of boneheaded mistakes, it’s when we are writing our first or second draft. Don’t worry about them when you’re getting your story down. It’s when you go back to refine your blog post, article, or manuscript that you want to keep a keen eye for contradictions and redundancies.