Many sites have lists of their favorite resources, but most of the lists I read are aimed towards other freelancers. I’m much more interested in what freelance writers consider their most valuable, specifically “for them” online resources. So I’m conducting this little poll, held in our comments section. Please feel free to chime in with your personal favorites.

My own personal favorites include Google Trends, which can be a huge help when looking for timely and relevant topics on the web. It you’re pitching queries to web-based publications, it helps to be on top of the latest and hottest stuff. Another great resource I use–especially when I write blog and Twitter posts–is Topix.com. I like to pull relevant headlines and stuff them into posts where it counts. A recent example—I found contradictory headlines on the economy (“Sales Drop In April” vs. “Consumers Splurge”) and made a nice bit of hay out of that.

What are YOUR favorite resources?

In this podcast Catherine discusses the term “on spec” as it applies to the beginning freelance writer. 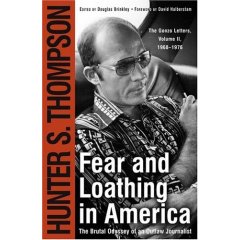 Documentary filmmaker Alex Gibney is responsible for a new film about my favorite American literature icon. Gonzo: The Life and Work of Hunter S. Thompson looks like a must-see, it’s just hit the cinemas so I can’t comment about the film just yet but I am excited to see a feature-length doc on one of freelance writing’s most notorious names.

As a freelancer, Thompson was a fascinating character. He often cracked under pressure, blowing so many high-profile gigs that it’s hard to believe he ever got an editor to take him seriously. His most famous work, Fear and Loathing in Las Vegas, came as the result of a failed freelance assignment. He was fired from Time magazine, had an ongoing tempestuous love/hate relationship with Rolling Stone, and spent his final years writing an often-late, slightly on-topic column for Sports Illustrated. It was the Thompson way, love it or hate it. Somehow, he managed to make it all work in the end.

The movie is tantalizing, as it features many of the people who figured largely in Thompson’s writing and those infamous collections of letters, The Proud Highway and Fear and Loathing in America. Jimmy Carter, Pat Buchanan, George McGovern, Johnny Depp, and Thompson’s first wife Sandi Wright are just a few of the people highlighted.

When Hunter Stockton Thompson shot himself on February 20, 2005, the western world of literature lost one of its most unique voices. There won’t be another like him, which is probably one of the reasons the documentary was made. Just who was this amazing, mad writer? If you don’t know much about the man or his work, this film is an excellent place to begin–after reading Fear and Loathing in Las Vegas, of course.

You can catch this interview with Gonzo director Alex Gibney which will more than whet your appetite for the documentary. It was shot at the 2008 Sundance Film Festival, and features Plum host Jeb Berrier. I’ll file a report on the film after the holiday.