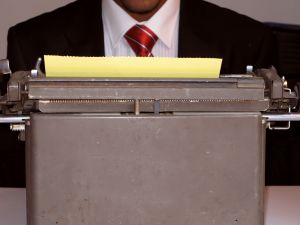 A recent comment asking about abuse of the apostrophe left me with the desire to elucidate further. Here you go, folks–no more abusing those apostrophes. You could go blind. Ever wonder why it looks RIGHT to add an apostrophe after a verb or to write “Open Seven Day’s A Week”?

Seeing that one fills me with the urge to go on a tri-state killing spree. The reason it looks “right”? You’re the victim of millions of bad menus, billboards, advertisements and other material. It looks WRONG now, you’ve seen it done badly so many times that right looks wrong. Welcome to Orwell land.

My handy memorization rule for apostrophes: Two basic uses–don’t bother any any others and you’ll never abuse them:

1. Used in a contraction. If you can’t remember how to properly render the apostrophe in a contraction, just spell it out instead. “It is” instead of “it’s” as in “It’s all about the Benjamins.”

2. Used to make a possessive. “Jeremy’s bicycle is a piece of crap.” “The creature’s claws got stuck in Jimmy’s scalp.”

A great mnemonic memory device for proper use of the apostrophe when it comes to “it is” or the possesive of “It” comes by way of Charles Bukowski, who wrote a book of poems called “It Catches My Heart In Its Hands”

Notice the apostrophe is omitted on the possessive of its. If my fuzzy memory serves me right, once upon a time they added an apostrophe AFTER the s, but that’s dropped out of the vernacular. 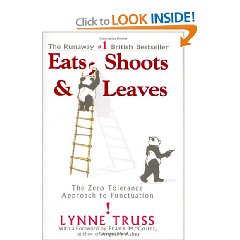 If you are looking for a great book on punctuation, here it is. Eats, Shoots & Leaves discusses everything from the apostrophe to the comma–and is a good read as well. Add this to your reference library and brush up on your sentence structure. It’s a good one.

I’ve seen it. I’ve even been guilty of it myself.

Abuse of the apostrophe.

As a writer, this is an inexcusable thing. It makes an editor think you are not up to writing for them. It marks you as an amateur. If you are one of the many people who struggles with how to (and when to) use this punctuation mark, please do yourself a favor and make 2009 the year you strive to get it right…here are some resources to brush up on things a bit: