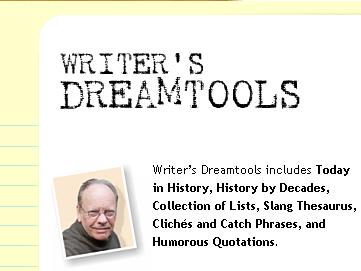 With all the iPhone apps and Facebook fun we’ve been posting lately,  I thought it would be good to throw out the occasional non-geeky thing. My favorite find as of late is Writer’s Dreamtools, a service offered by Larry Belling. You can get free access to historical databases and a section on web humor, but for a very reasonable one-time fee you can score a collection of lists (over 600!), quotes, a slang thesaurus and much more—all compiled over a whopping 25 years. The free stuff is just as good. Have a look at Writer’s Dreamtools—if nothing else it could inspire you to think of some new ways to revise some of your old material with some fresh quotes or quips.

I have a weird fetish for archaic words. Anachronistic slang is especially amusing. Who uses “daddy-o” anymore? Nobody, that’s who. “Squares” is a word that now refers to packs of cigarettes traded in prison as opposed to straightlaced, non-adventurous people. What’s a Yippie? You used to be able to point to 60s rabble-rouser Abbie Hoffman as an example, but there aren’t any more Yippies, period.

So much has fallen out of the vernacular, but I am constantly amused reading dialog in fiction written in the 60s and 70s (especially John D. MacDonald, Donald Westlake, Gregory McDonald, Stephen King’s early work, etc. You’ll also hear plenty in movies of the period…they don’t write ’em like that anymore!)

10. Jive. A pejorative, as in “jive turkey”. A hilariously dated 60s/70s colloquialism.  Can be used as a verb. “Don’t jive me.” Should be brought back with haste, especially in technical writing and documentary filmmaking.

9. Tutti Frutti. A flavor popular in the 40s. Does anyone actually know what Tutti Frutti tasted like? A genuine mystery, at least to me. OK, so technically this is a proper name and not a “word” per se, but it’s still evocative of a particular era and has long since fallen out of fashion. Please note that I make no claims to be 100% accurate or encyclopedic in these references, they’re just as I understand their useages.

8. Hobo. A vagrant, sometimes an occasional itinerant laborer. As opposed to a tramp who was basically a traveling homeless person who does not work. Not to be confused with a stewbum–a drunkard who often resorts to drinking any liquid containing alcohol.

7. Hi-Fi. As in, “high fidelity”. Used to refer to expensive stereo gear. Outdated technology. Equally amusing are references to a “crystal set” which used to mean a radio build using a crystal as a semiconductor. These radios required no electricity to operate, drawing power from the radio signal itself picked up by the antenna.

6. Leet. Commonly used in underground press in the mid to late 90s; short for “elite”. Often rendered in a very annoying alphanumeric modification of english called “leet-speak” as L33t.

4. Flivver, usually in reference to an automobile.

3. Typist. Old school writing technology job requiring the use of a typewriter–a primitive manual word processor which pressed words onto paper without the use of a printer.

2. Shorthand–a form of secretarial code used to write large volumes of words quickly. Once a required, seemingly arcane skill now lost to the ages unless you like poring over ancient library books.

1. Y2K–shorthand for a computer glitch expected to disable or shut down all computers one minute after midnight on New Year’s Eve 2000. This phrase was all the rage for two years before the big moment, which came and went without so much as a whisper of a problem. The digital version of another anachronistic phrase no longer in use: “World War Three”.

The Dictionary of Slang is a terrific place to brush up on your UK slang, either before a trip there or for an article. It can also be helpful for decoding words from the UK that make you scratch your head and wonder…for example…can you correctly use the word “pan” in a slang sentence?