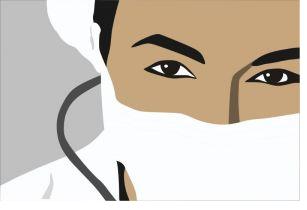 In the early days as a full-time freelancer, I did not have health insurance. Part of the reason for doing what some would call playing healthcare roulette had to do with the fact that I had plenty of free coverage (albeit limited in some cases) thanks to my former job as a military writer and editor. When I worked for Air Force News and the American Forces Network, I never needed to pay for healthcare and when I got out I had a transition period where I had access to coverage. No longer.

And yes, in the interests of transparency I will admit that I didn’t have ANY health insurance for a time after my old coverage no longer applied. I figured I was healthy, careful and not about to develop any major problems. I took a gamble that fortunately for me, paid off. But I could easily have been flattened by a runaway bus or a nutjob with a steak knife. Lucky for me it never happened.

My research into the scary and daunting world of health insurance for freelancers has turned up some scary numbers. Since it’s so early in the hunt for affordable healthcare, as someone with the unmitigated audacity to work for themselves instead of being chained to a desk in the Land Of The Cubicles I am naturally a bit put off (terrified?) by what I have found so far. But for every unnerving discovery about freelance health insurance, I find at least one solid resource or advice site with practical, no-nonsense advice either about taxes, the insurance itself or the business of freelancing in general.

One of my most fruitful discoveries to date is AllBusiness.com. I will confess that I’ve only seen the articles on self-employed taxes and health insurance, but I have high hopes based on the strength of this series. Granted, it was written in 2006 and some legal issues have changed or will be changing, but it feels like a great place to start. All Business seems–again, at first glance–like a great no-nonsense resource for anyone serious about making a profit as a freelancer, small business owner or self-employed person. They have not one, but THREE podcasts and feature call-in numbers so you can ask questions on the shows. I am impressed.

The quest for AFFORDABLE freelance health insurance that doesn’t demand insane deductibles goes on. I’ll be passing along my findings here, including a look at what you can find by joining MediaBistro.com’s AvantGuild or the Freelancers Union.