END_OF_DOCUMENT_TOKEN_TO_BE_REPLACED

I just helped an old friend out, giving her what I’d call a narrow escape. I had just gotten back in touch with someone I hadn’t seen in years…when catching up, I learned she was working on her first three chapters of a novel that PublishAmerica expressed an interest in.

This set off warning bells as I’ve read many negative things about PublishAmerica–not the least of which includes an author testing PA by sending them a manuscript, reportedly containing the same 30 pages repeated ten times. PublishAmerica has gotten bad ink in respected places including Absolute Write.

END_OF_DOCUMENT_TOKEN_TO_BE_REPLACED

An interesting article at FreelanceWriting.com includes this quote:

“Many individuals who lack writing skills drive down rates, way below what professional writers can rightfully charge. If the true professionals do not keep up their prices, this will become an even bigger problem. Just because writers from other countries want to work for eight or nine American dollars per hour, this doesn’t mean you should.”

That by Brian Scott, who in the same article advises writers to list their rates on a website and collect a retainer up front. I disagree with both of these suggestions for two reasons. I never list my rates on my website–it prevents me from being flexible with small clients who work on limited budgets. Let’s say you find a non-profit you believe in and want to cut them a break–listing your rates up front could scare them away before they even get in touch. In theory, you’re also committed to those rates regardless of how labor-intensive the project winds up being. END_OF_DOCUMENT_TOKEN_TO_BE_REPLACED

Interesting reading over at the New York Times. This article by John Pareles is interesting enough to me as a very part-time musician and goofy music creator (ask Cath about her addiction to “Psychadelic Beige Orangutangs” available on CD Baby and iTunes).

But if you can read between the lines and insert the phrase “freelance writer” everywhere you read “musician” or “band” you get an idea of how this article could generate LOADS of great marketing ideas. What on earth does David Bowie shilling for Lincolns have to do with writers getting ahead of the game in a recession?

For a start, writers need to think more like musicians when it comes to plugging their work and talents. Writing isn’t as sexy as being in a band, but the marketing needs are the same–get your material in front of as many people as humanly possible. Could writers start pimping themselves out like rockers, doing endorsements and trying to create a bigger brand for themselves?

Why, I do believe the answer is a great big YES. 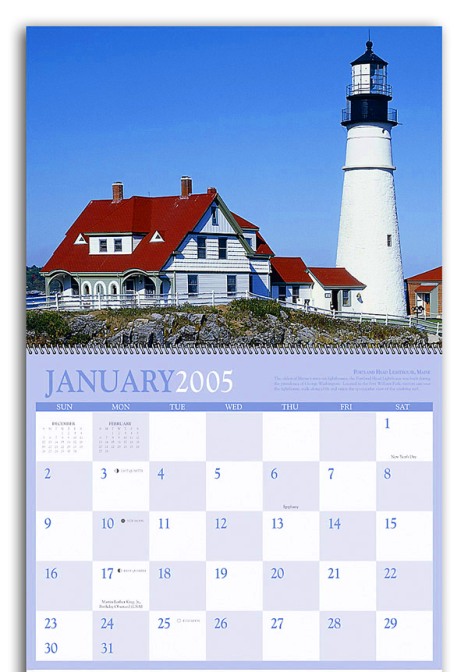 Mark your calendars, April 15, 2009 is fast approaching. Tax time is hell time for most freelancers, but here’s a little hint that will make tax season 2010 seem like a breeze. Grab your pens, kids, this one’s a real brain tickler.

When you see how much you owe in taxes for 2008, make a mental note. That’s the minimum you should consider spending on your business in legitimate, legal expenses for 2009.

You’re going to earn more freelance money in 2009 than you did in 2008 unless you hit bad luck, give up and go back to your day job or just quit trying. Plan on spending more money on your business this year–what’s the point in giving it over to the government when you can take legit, IRS-approved deductions for upgrading your office, advertising your business or hiring casual labor to take some of the donkey work off your plate?

Why did I choose a 2005 calendar to illustrate this blog post? Because I wound up owing the IRS for my earnings in 2005, and if I had just planned ahead and made some crucial investments in my writing business I could have paid far less while giving my work a much-needed boost with a high-speed Internet connection, a GOOD cell phone instead of the crappy one I had put up with for so long, and several other upgrades.

Be smart in 09. Do the math and plan ahead. Make those purchases and promote your business. You should pay all the taxes you owe–but make damn sure you don’t owe as much as you could when there are legit deductions to be had.