When should you use a comma with the word “but”? You can use commas whenever they don’t break up the sentence and interfere with the meaning.

Here’s an example: “Everybody but Jason stopped eating.” It wouldn’t make sense to put a comma after the word everybody because then you have a sentence fragment that isn’t telling us anything. And it would disrupt the meaning of the sentence.

But in the sentence, “I like ice cream, but not banana flavored,” the comma is well-placed. That’s because you have a whole clause that is not broken and it contains a pronoun, a verb, and the direct object.

What about “He chose not one but two tuxedos”? You tell me.

I’m always amused when I ask someone if they mind if I do something, and they say yes when they really mean to say no. Here’s an example:

Me: “Do you mind if I borrow your printer?”

Other person: “Sure, go ahead.”

Wrong answer! The question was, do you mind?, so the answer should be no. In an ideal world, this is the way people would answer:

Me: “Do you mind if I borrow your printer?”

Other person: “What’s wrong with your printer?”

Me: “Well, I just got a new laser printer, and the paper jammed, and when I went to replace the toner the store was closed, so I had to go to visit my neighbor…”

So, what’s the right way to use the term literally? “Forty-five people stood in line at the Dairy Queen on a hot summer night, but the DQ literally only had enough ice cream to feed twenty-nine of them.” As long as it took place and it makes sense in the real world, you can say literally.

Figuratively encompasses different forms of speech like metaphors and similies, when we compare something to something it’s not. The barking dog is a good example of a simile, which is a form of figurative speech that usually uses the term “like” or “as.” “He looked like a ghost” and “he swam like a fish” are both similies.

This post is sposnored by FiledBy – where authors can claim their free website and build their online marketing platform.

I know I have mentioned this great resource before, but only in passing. Grammar Girl is a heavy-duty tool for the writer–new or experienced. Mignon Fogarty is the name behind this character, and her “Quick and Dirty Tips For Better Writing” include goodies such as:

These are excellent, bite-sized tips for the writer that can mean the difference between getting a query nod and having the editor hit delete. Let’s face it–in this business, you’ve got to know what you are doing when it comes to grammar and sentence structure.

It doesn’t really matter how you decide to keep up with Grammar Girl. She’s on Twitter and she even has her own podcast on iTunes. A little honesty? It’s the only podcast that I have actually downloaded and listened to on my iPhone.

Naturally, if you prefer a good, old-fashioned book you can go that route as well.

Why am I so excited about this? Well, grammar is huge, and it is usually presented in the most awful, boring format. Grammar Girl gives it to you straight, but in a palatable way, without taking too long to get the point across. I’m a serious fan. 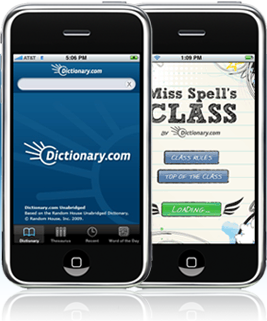 First of all…if you haven’t yet taken advantage of the free app from Dictionary.com for the iPhone, Blackberry or Android, don’t waste time–get it now. This is a great resource to have with you on the go, and you never know when you will need it. Plus, it’s free.

I’ve seen it one time too many lately, and I thought I would share a great resource for knowing when to use it’s as opposed to its. Once you know the rules, it isn’t hard. (Or should I say it’s not hard?)

As I was writing this post I realized something. It’s so easy to get lazy as a writer. To avoid looking up rules and just go with another choice when trying to put together a sentence. I’m going to start sharing the tidbits I have picked up along the way with Freelance-Zone readers. Consider this the first of many!

And most infamously, in a crucial political race on the east coast, an advertisement for Massachusetts Attorney General Martha Coakley’s senatorial campaign misspelled the name of the state. According to LegalNewsline.com, “After a three-person debate Monday night, an attack ad on Republican state Sen. Scott Brown paid for by the state’s Democratic Party spelled it ‘Massachusettes.’ The ad was ‘authorized by Martha Coakley for Senate and approved by Martha Coakley.” END_OF_DOCUMENT_TOKEN_TO_BE_REPLACED