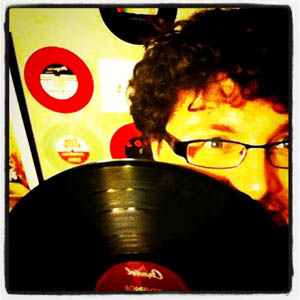 Last year I had a six-week period where none of my clients paid on time. As a result I naturally had to scramble to get my bills paid, and the fact that I had just dropped a large investment in some vinyl records to sell at an upcoming convention didn’t help matters–I was counting on getting paid to insure the rent check didn’t bounce.

Instead, I found myself hustling my vinyl very hard at that convention and managed somehow to squeak by thanks to the generosity of my record buying friends and followers online.

You read it right–my “side income” suddenly became the main event for me for nearly two months.

There was an unexpected side effect of my pay issues as a result–I feel like I have some financial stress issues that come from constantly second-guessing when that perfect storm of late paying clients might happen again. So now more than ever I’m trying to take steps to shore up my cash reserves and boost my side income activities. The more solid my non-writing side income can get, the better off I’ll be in the long run.

But really, those cash reserves are the most important part–having a cushion to fall back on is very important since it’s never clear when there might be a work slowdown or outright stop. Late payment is bad enough, but a paycheck that gets cut in half due to a lack of work is an emergency for many freelancers I know, including ME.

Some writers I know have taken side jobs in non-writing capacities, but I wasn’t smart enough to do that. My side income comes from my own business, which takes additional money to run. Last year when I had some extra money to invest in the biz, I took the initiative and bought some extra supplies and things to sell so that if times get lean here, there’s more “here and now” profit I could use to get through the hard times if they arise.

Not ideal to be sure, but let’s call it limping towards financial stability. Sooner or later, I’ll be forced to pay the piper and start socking money away for that rainy day that we all know might come tomorrow or the next day. Here’s hoping it’s next week year instead. For now, I’m putting as much aside as I can afford, but it ain’t much. Rain, rain, go away.

Joe Wallace writes about and sells vinyl records. He recently finished writing the book WTF Records: The Turntabling Guide To Weird and Wonderful Vinyl and currently seeks a publisher who is amused by awful album covers and records put out by karate-chopping preachers. Wallace runs the blog Turntabling.net and watches a lot of Italian crime movies on Netflix.