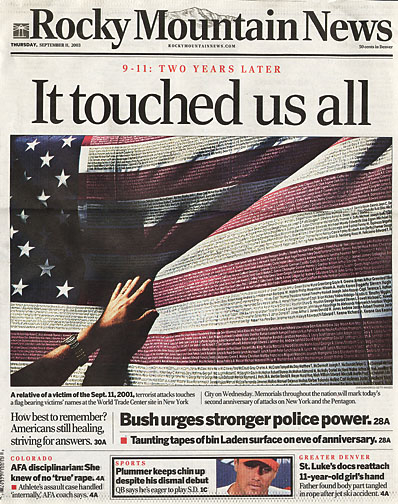 The Rocky Mountain News, just before celebrating its 150th birthday, is closing shop. Most freelancers will snicker at the notion that this is a harbinger of doom for print pubs in general, but for some reason this has the distinct feel of the first of many.

Some newspapers are getting federal grant money to train their workers to be more net and computer savvy. But I don’t think it’s going to help clueless publications like the Chicago Tribune–the papers who don’t get web savvy in a hurry are just marking time on the calendar til everybody’s fired.

For the Trib, it might be too late. But regardless, it’s best to view the closing to the Rocky Mountain News as a warning. I’ve said it here before but it bears repeating–the web is where it’s at, folks. Newsstand publications are an awful lot like those old west cowboys facing the end with the advent of large-scale organized farming and cattle operations. The old timers will stick around til the end, but for those new to the game, it’s best to get off to the right start using today’s tech.

If you are still depending on newsstang gigs for a large portion of your income, more power to you–but your days are numbered. Enjoy them while you can.

The L.A. Times reports the Chicago Tribune has filed for Chapter 11 bankruptcy protection. This is the start of what I predicted back in June with my screed Why the Chicago Tribune is Going to Fold.  When the top names at major papers like the Trib admit they are not computer savvy, you can practically see the vultures gathering above Chicago’s famous Tribune Tower.

Bye, bye, print newspapers…it was fun while it lasted. Even the New York Times is gasping for air, and it won’t be long before people will refer to print papers in the past tense. As I stated back in June, the Internet is NOT killing newspapers–they are doing a wonderful job of euthanizing themselves.