Picture this: You’re lying comfortably in your bed, dozing away and your alarm begins to ring. You roll over, shake yourself from your dream and groggily rub your eyes. That tell-tale, occasionally maddening noise is a reminder that no matter how early it seems, it’s time to leave that cozy bed for a day of work.

Whether or not you set your alarm clock every morning, most freelancers can relate to that grouchy feeling that we all get now and then– you know, a “case of the Mondays.” END_OF_DOCUMENT_TOKEN_TO_BE_REPLACED Wired reports on an interesting development that means more freelance opportunities at Starbucks. And possibly WITH Starbucks.

In the last few years, unless you have an AT&T account or purchase and use a Starbucks gift card, there was no such thing as a publicly available wi-fi signal at the famous coffee shop chain. iPhone users could happily freelance away thanks to their AT&T mobile login, but the rest of the freelancers had to make do some other way.

But Starbucks has finally realized what all those people typing away furiously at their Macs and Windows laptops REALLY want from Starbucks aside from those high-calorie pastries and pricey lattes. A place to get stuff done–an office away from home. One that has music that won’t make you run screaming for the earplugs (except when they play that Paul McCartney album AGAIN for the millionth time.)

According to Wired, “Starting July 1, Starbucks will let anyone connect to its WiFi network for free. This fall, the company will add a content network called Starbucks Digital Network, in partnership with Yahoo and other sites, which will include local content you won’t be able to read anywhere else. Both offerings will be free.”

Now that in itself is very good news, but did you see the hidden freelance opportunity possibly lurking in that sentence? Starbucks Digital is offering unique content on their free wi-fi network.
That means jobs for writers. Possibly permanent gigs combined with contract gigs. The free wi-fi wakeup call has finally come and that means VERY good things for anyone living within range of a Starbucks who doesn’t have a good indie coffee shop nearby. Hey, our sympathies are definitely with the indies…what can we say?
But if you’re in need of a steady gig and drooling over the notion of working for a company that could as a perk of employment or contract possibly set you up with free java? You’re probably already looking in the Careers section of Starbucks Inc trying to find those Writer Wanted listings. 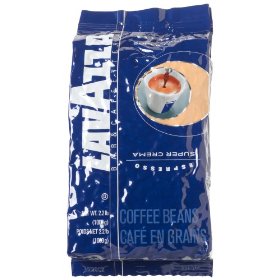 Coffee is the fuel of the freelance lifestyle, to be sure. But espresso is what some of us freelancers call the super-unleaded of writing. And when it comes to excellent, high-octane writing fuel, you can’t get much better than Lavazza.

Lavazza is enjoyed all over the world from the coffee bars of Jeonju in South Korea to the cafe down the street in Lincoln Square in Chicago. But never mind the frequent flyer miles, you can taste this gorgeous Lavazza Supercrema roast right in your own kitchen before hitting the freelance writing job hunt, thanks to this sale-priced bag of whole-bean espresso.

Normally retailing for about $25 at Amazon, you can score this highly recommended bag for approximately $19 (at press time). It’s true that freelance writing makes coffee snobs out of more than a few of us…find out why. We’re loving this stuff. And it’s priced to move. 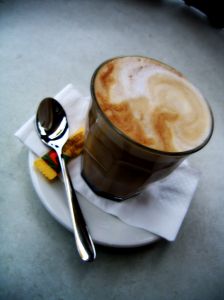 A Gothamist report says more and more coffee shops are turning their noses up at laptop customers. I don’t know about you, but that sounds like a clear case of biting the hand that feeds you the money.

Granted, Gothamist was citing a Wall Street Journal piece aimed specifically at New York City coffee shops, but if this is a trend that catches on, I predict armies of annoyed, decaffeinating freelancers fleeing the coffee shops in favor of more friendly environs. And trust me, there are plenty of retailers willing to step in and take advantage of any blowback from coffee shop snobs who hate laptops.

Here’s a golden opportunity for Starbucks to get some of its own back. Open the floodgates and offer free wi-fi, plus some signage welcoming the terminally connected. The sign would say, “Your Home Away From Home: With Caffeine“.

Attention coffee shop corporate HQ–you can pay me for that one, it’s mine and copyrighted now. I’ll let you have it for 10K plus free beverages for life. In the meantime, doom on you, laptop-hating coffee shops…your days are numbered. 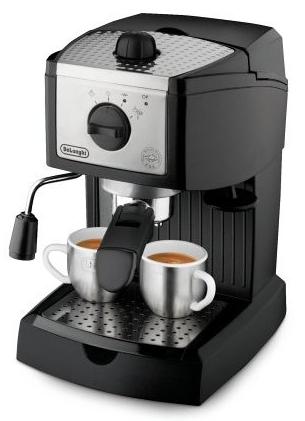 For writers, caffeinated beverages are not just a way to get the brain buzzing. Caffeine is FOOD. There’s nothing like the feeling that all your neurons are firing at once as your fingers sail across the keyboard. We just work better in a highly stimulated state, and besides, it’s brain surgeons who need the steady hands, not us.

We are digging the DeLonghi espresso maker for many reasons–it’s priced under a hundred, it gives you quality espresso and latte drinks with ease using espresso pods, or you can tamp your own grind. We love the pods since they are easy and hassle-free. Reviewers of this machine who claim to love Starbucks say the DeLonghi could put a dent in coffee shop stock.