Just for today, let’s be outrageous. 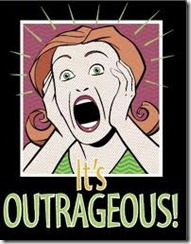 Let’s find everything within us that is wild and improbable, that is fantastic beyond imagination, and let’s use it to elevate our writing.  To seize the moment.  To be the writers we were meant to be.

Let’s realize, just for today, that we have the ability to use words so that no reader walks away unchanged.

“What?  Are we in the business of changing people?”

Only if you think writing something worth remembering is your calling.

Only if you care about your reader.

Only if you believe it’s possible for humans to change and grow and that this means you, too.

Because, really, how do you think they do that, that change and grow thing? Is it by thinking the same thoughts over and over?  By taking the same actions?  By seeing the world in the same way?  By feeling only what they’ve felt before?

No, no, a thousand times no.

In the world of change, writers burn bright.

We are among the few who are allowed inside the mind and hearts of complete strangers. We change the world one page at a time, one reader at a time.

We go in there and use their own imaginations to create a reality (guided by our words) they have never experienced until they read what we have written.  They “see” what we write, entire worlds not just words.  Their bodies respond with real chemical changes.  We can even change how they breathe.

But I think most writers waste this opportunity to change the world.  They retell stories we’ve heard before, with only slight variation.  They write what we already know.  They forget that the first person to change is themselves.

Imagine writing something that expands you?  You are your first audience, right?

So back to being outrageous.  The point is that writing is powerful stuff, and it’s easy to slip into meeting writing deadlines, getting the story told, and getting a check mark.

A good way to kick yourself in the butt is to be outrageous.  On purpose.  Outrageously amazing writing will get you a little bit closer to that heady stuff.

5 Outrageous Ways To Focus Your Writing and Change the World

You know the ones.  It’s what you’ll forever remember after you’re done reading and why you clip the article, save the book, and underline the passage.

It’s that one scene that will forever be frozen in your memory..

The moment you see the hidden web of connection.

The conversation that changed the trajectory of all action to come.

The moment that your breathing changed.

Give us a new myth, a new version of who we are or could become.

Show us that part of ourselves that we wouldn’t look at if we had a choice.

Make us realize we are more complex than we thought possible. Scare us, heal us, amaze us, or leave us shocked.  But above all, mesmerize us through the lens of character.

Don’t stop writing until you do.  Until you have told a truth, you have only flung words onto the page.  Nice words. Well behaved. Pseudo-deep and full of empty spaces held together with twine and half-hearted glue.

As a writer, you need to feel the brisk and ice-cold wind of near death.  Safe prose, workable scenes, they don’t change anything or anyone.

Take a risk and let your brave face take the onslaught of cutting ice and jagged, wild expression, that razor-sharp prose with teeth.  You’ll feel alive and so will your reader.

#5  Find the Outrageous Ending that is Greater than the Sum of the Words.

Go somewhere important.  Blow our doors off.  Realize what your subconscious was telling you as your wrote everything that came before, and then write it with everything you’ve got.

The reverberation will be something to behold.

And today, you’ll have been outrageous.

You have some ‘splaining to do.

The Novel and Short Story Protagonist’s Guild (in league with the Heroes’ Union) has done an extensive survey of members, and we find evidence of a widespread campaign by authors to diminish our stature in fiction. 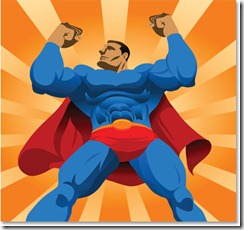 In short, as “the main doer” in your stories, we demand a little respect.

Quit making us oblivious to the evils in the world.  We’re tired of being perpetually shocked, confused, surprised, sideswiped, and devastated by the mercurial nature of being alive a world where Bad Things Happen.

Why, oh, why do we always have to believe that our lives are picture perfect and destined to stay that way… until BOOM, you drop conflict, tragedy, and upheaval into our laps.

Would it really be so bad if this wasn’t the first problem we’ve had to handle?

Ug.  There’s nothing more frustrating than signing up for a noble, heroic role only to find out that, once again, we’re frail, sincere, and ill-equipped to handle the story ahead.

Well, actually there is something more frustrating.  It’s getting to play a well-equipped hero, only to find out that your definition of heroic means that we’re here to out kill, out torture, and out destroy the villain.

You think we won’t notice you’ve made us into villains?

Yeah.  We end up in therapy.  Angels weep.  Humankind forgets the mythic roots of story.  And somewhere, a reader’s dim memory of epic story flickers out.

No, wait.  What you really mean is that we’re self-involved, depressed, angry, untrusting,traumatized,  jaded, pessimistic, and perpetually unhappy.

We call that a cheap and easy substitute for deep.

It’s your job to think, to make the hard decisions and plumb the depths of humanity.  Yet, time after time, you resort to the easy answer.  If you want a “deep” protagonist, you make him unhappy, suicidal, antisocial, and angst-ridden.

Newsflash: Emotional, spiritual, and intellectual depth are seldom explored when stuck in depression.  When someone is traumatized, they do not suddenly become deep.  And pessimistic people latch onto every negative they hear and totally give up. Huh.  That looks kinda thin to us. Not a lot of character depth required in jumping to ‘life sucks, so why try?’

We hereby recall the word "’deep’.’  In its place, from now on, use the word ‘profound.’

Why is it you confuse realistic with skeevy, mean, snarky, lacking in morals, and pretty much everything related to jackassery.

While there are real people with those traits, do you honestly believe that character’s aren’t realistic unless they’re a pain in the ass?  (This would explain much, if your answer is yes.)

We’d like to introduce you to the idea that  an author’s keen eye in observing his fellow humanity should extend past the current trend of celebrating protagonists who are jerks.

Make up your mind already.  Are we the protagonists of your stories or the victims?  Victims are a whole other union, and we’re tired of being tricked into playing victims in your books.

As protagonists, we’re the doers of your story’s action.

Victims don’t do.  They twist their wimpy ankles. They wait for the next badness that you have planned, knowing they need to be rescued, but unable to make it go.

Many of you writer-types already get that.  But what you don’t get is that we protagonists care deeply about what’s happening now and about what will happen next.

We’re not neutral, nor do we float along.

We don’t just wake up the next day a blank slate, unable to make up our minds or unaware of the current story and our part in it.

We care, we decide, we act, we react.  And we certainly don’t give up.

Victims may care, but they’re prevented from deciding, acting, and reacting by the plot or their own inertia.

So, let’s be clear.  If you hire us protagonists, we’re gonna need to Get It On.  None of this sitting around, falling into things, or not knowing what we want.

Bottom line, we have a powerful function in your stories.  We’ve earned your respect over centuries.  And we’re banding together to say, “You can do better by us.”

(Or else we’ll contact the Villain’s Union, if you get our meaning.)