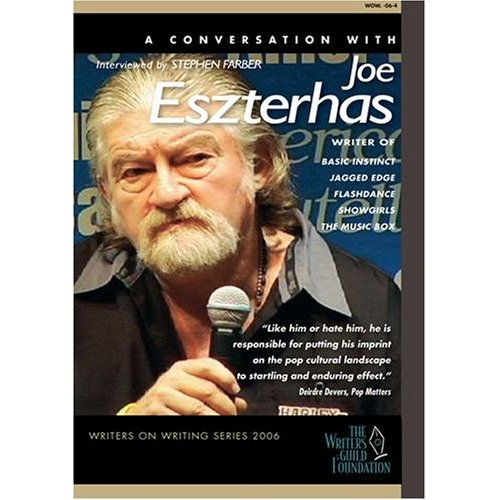 Transparency alert–I have NOT read this book yet. But if it’s ANYTHING at all like Eszterhas’s The Devil’s Guide To Hollywood, which was a rough-n-ready how-to for apsiring screenwriters, Joe Eszterhas Writers On Writing should be a very entertaining, inspirational read.

Eszterhas was the bad boy of Hollywood–he wrote Basic Instinct, Jade, Burn Hollywood Burn, plus the controversial (and insipid) Showgirls. He’s the stuff of legend–telling his employers where to stick it at every turn when they tried to tell him how to do his work (these were not fellow writers, mind you–sound familiar?).

In spite of his wild man status, even the most sainted among us can find some inspiration from Eszterhas for one simple reason–his ultimate philosophy is simple. YOU are the writer, NEVER give up, and don’t let people who don’t know the game tell you what the rules are. That’s the sort of tough-mindedness you need to survive in the biz whether you’re writing for Associated Content or for Stevie Spielberg.

It should be pointed out that this time, Eszterhas isn’t the one behind the pen–he’s being interviewed by Stephen Farber. This book is part of a series by the Writers Guild Foundation, so it’s a bit different in style and tone than Joe Eszterhas’s titles like Hollywood Animal and The Devil’s Guide to Hollywood. 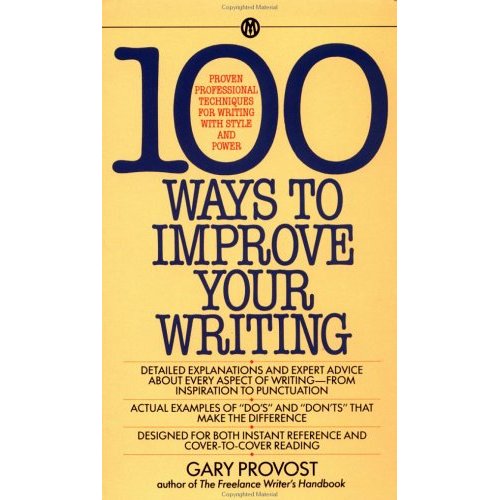 Why am I purchasing this book today? 100 Ways to Improve Your Writing by Gary Provost is, to be completely honest, one of those books I don’t even need to read the cover blurbs for. I’m the kind of person who constantly looks for ways to improve–everything from re-reading the Chicago Manual of Style to memorizing Strunk & White, I have become a student of the written word.

Even after decades of writing and editing, I still find the best way to stay on top of my game is to read books like this. Even if I think I know the writing game pretty well, volumes like this one ALWAYS have something I forgot to consider or never saw in quite THAT way before. So I’m purchasing this book from Amazon today, just as soon as I get done writing this up. If you’re a student of the writing game, chances are you’re in the same boat I am…you have probably already read this one and I’m just a come-lately on this title. 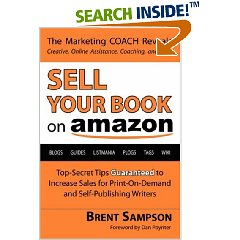 Brett Sampson tells all. This book is about how to get listed on Amazon, how to promote your book and increase sales. We borrow a quote from Sampson’s Sell Your Book on Amazon product page:

“Penny C. Sansevieri of Author Marketing Experts says, “Finally! A book that helps you demystify Amazon. If you have a book to sell, you simply must own Sell Your Book on Amazon.”

The marketing copy for this also claims to help you “beat Amazon at their own game”, and learn how to create “virtuous circles” (as opposed to vicious cycles, I’m guessing). While I’m no fan of breathless marketing hyperbole, I have to say that any book which helps a writer properly value their work and assign a reasonable price should be worth a read. Sell Your Book on Amazon has all the right chapters, and according to the author himself, this does NOT tell you how to get on the bestseller list. Instead, it offers strategies to help your book do well over the long term. If you’re a believer in Chris Anderson’s Long Tail concept, this book should appeal. 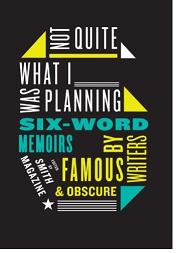 Smith Magazine sent out a challenge to writers–describe your life in six words or less. The results are collected here in an addictive 240-page book you can literally read in snippets for months on end. Not Quite What I Was Planning is a fascinating collection, and you’ll be trying to compose your own six-word memoirs after reading entries like Chuck Klosterman’s:

“Nobody cared, then they did. Why?”

Or how about the words of Scott Birch? “Most successful accomplishments based on spite.” Yes, the notion for this book sounds totally useless, but just like popcorn you can’t stop once you’ve had a handful. This is one of those ideas that turns you green with envy. Why didn’t we think of this first? The price on this literary indulgence makes it irresistable. Buy five of them and you’ve got a handy gift anytime you need one in a pinch.