I’ve been blogging and writing for one company for a couple of years now, and I find the website taking a turn I don’t really like. The site will have new features that won’t be accepted by the audience we already have and I don’t see this working out very well. I think they might start looking like a liability on my resume instead of an asset once the new features start showing up. Have you got any advice for a freelancer watching a decent paying gig start to self-destruct?”

(Transparency alert–the above question was re-worked and paraphrased to protect identities of both the innocent and the guilty. No actual names or situations have been revealed in the interest of privacy.)

If freelancers should learn anything from the Internet bust-and-boom cycles of the last 20 years, its this–sometimes bad companies do good things, and sometimes good companies manage to screw up what they have in the pursuit of the almighty dollar. And then there are the entrepreneurs out there with deep pockets and dumb ideas.

Every good freelancer with enough time in the game will eventually be put into a position where they can get some easy cash writing or editing content for such well-heeled, but ultimately clueless operators. We do the work, make it shine as best we can, and take the paychecks. The question is, how long do you keep feeding off that easy money?

Scratch that. The REAL question is more along the lines of, “How long can you keep investing your time in stuff you’ll never be able to use on a freelance resume?”

Here’s what works for me personally. I have taken plenty of paychecks—large ones–from people who ended up folding, failing, giving up or going away. I give ’em my best, or in some cases as much as effort as the gig deserved when demands became unreasonable and excessive. But what I should NEVER have done–but DID do to my own detriment–was let any such gig become a primary source of income.

Whenever I DID let a clown company or clueless operator become my main source of income, at some point I would always wake up to the fact that I was setting myself up for disaster and start looking around to establish side gigs. I’d get enough side gigs running to help me transition out of the work I was doing for the dingbats and bail when things became truly intolerable.

I figure for each time I had to make such a move, I spent about three months building up enough steady work after finally giving the heave-ho to the well-funded dummies. I strongly urge you to get at least three months of operating cash saved and ready if you can–you’re going to need it while you start powering up your side gigs into more income.

Pretend you’re quitting your day job to go fulltime freelance and you’ve got the right mentality to make the switch–at least, that’s the approach that works for me.

Got questions on the freelance life? ASK US. Drop us an e-mail with your freelance questions to questions (at) freelance (dash) zone (dot) com.

Joe Wallace is Freelance-Zone.com’s co-founder. His credits include a 13-year stint as a military journalist for Air Force News Agency and web copy for projects on Wal-Mart.com, Shopping.AOL.com, and Verizon Wireless. He is a freelance web editor for Motorola and runs seminars on freelance writing and social media in the Chicago area. In his spare time he runs Turntabling.net, a blog about vinyl records, drive-in culture, and film soundtracks. 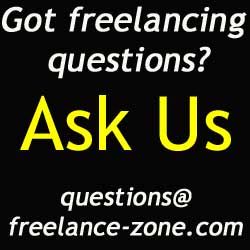 Drop us an e-mail with your questions about freelance gigs, freelance writing, freelance editing, getting paid, submitting freelance invoices, freelance tax nightmares (we don’t give ‘advice’ on taxes, just share what works for us) insurance and much more. FZ is here to help. Questions are answered by veteran freelance writers and editors who know exactly how the game is played. Joe Wallace and Catherine L. Tully are experienced, full time freelancers ready for your questions.