If you’re a parent, your freelance income has to cover a lot of school expenses for your children.  Here are some important considerations before you spend money on a tablet computer for your back-to-school offspring. These tips are courtesy of DealNews.com, who invited me to excerpt their full list, written by media editor Jeff Somogyi. 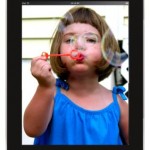 With summer already on its way out, your college-bound child is probably in the midst of asking for more and more money to buy the “essentials” they’ll need for dorm life in the upcoming school year. (FYI: A BMX bike is not an essential school requirement for anyone, except those attending BMX U.) It’s very likely that they’ve also mentioned needing a little device called the “iPad.” That may have gotten you wondering if, in this day-and-age, the iPad should be considered instead of a laptop for kids heading off to university.

And so, as the youngins are about to matriculate, they’ll come at you with all sorts of “reasons” why the iPad is a “valuable tool” for “learning.” Are you prepared to fight back? Are you armed with the knowledge you need to protect your dollars? You better be, because — as we’ll show you — the iPad just isn’t a suitable replacement for a laptop, in terms of meeting your student’s needs. Here are 10 good reasons why:

An iPad, at its most basic 16GB configuration with Wi-Fi connectivity starts at $399 — and that’s for last year’s model. The latest model, which is packed with a retina display and all sorts of extra goodies, starts at $499. The higher-end models (that include 64GB of storage and 3G connectivity) can burn a hole into you wallet in the shape of $829 … with additional per-month rates for data plans. Even at the cheaper end of the spectrum, we often find full-fledged laptops deals for about that price. Though the iPad 2 is close, it just doesn’t make monetary sense to buy an iPad instead of a laptop.

2. It’s not the best solution for note-taking or editing documents

A virtual keyboard doesn’t have any tactile feedback. This tech is fine for a quick text on your smartphone, but the iPad’s keyboard — which is a non-standard shape and size — is a bit more awkward. And say goodbye to touch-typing because your fingers will start drifting, and you’ll soon wind up with a page of gibberish.

Further, if you do manage to struggle your way through writing an entire term paper on the tablet, editing is another headache completely. Using your finger tip for fine placement of the cursor is next to impossible, and it’ll take you a few tries to land it where you need it. After several failed attempts, you’ll be wishing you had a laptop with a real keyboard and mouse.

Taking a tablet everywhere means there’s a greater chance of dropping it anywhere, and breaking it. There will even be more of a chance that your kid will forget completely that it’s in their bag and, as kids will, fling their satchel across the room — only to be rewarded with a gut-wrenching *crack*, followed by a cold-sweat-inducing *tinkle* of broken screen glass. Just try forgetting you have a 5+ lb. laptop in your bag!

Your college kid wanting an iPad is second only to the desire of a criminal to steal one. It’s so light (see above) and small that it’s easy for a n’ere-do-well to quickly yoink and abscond. Sure, there are security locks you can use, just like the kind you can get for a laptop, but who — especially among the devil-may-care college-age set — really takes the time to actually use it instead of saying, “Pfft! It won’t happen to me?”

The iTunes App Store boasts more than 500,000 apps — which is tantamount to over 500,000 distractions for your child, who’s supposed to be paying attention to his professor. (Well, 599,998 distractions and two dealnews apps! WINK!) Angry Birds, too, will be calling during those long lectures, we’re sure. But on the contrary, would anyone boot up DOOM or Minesweeper on a laptop in the middle of a lecture? Probably not. That’s a commitment that doesn’t allow them to lie to themselves that it’ll be “just for a minute.”

6. eTextbooks are a marvel, but there’s no secondary market

Your kid will probably make the argument that an iPad can display digital textbooks and, since the device is lighter than a stack of dead-tree tomes, you’d be saving the planet and them from years of backache and possibly a future addiction to painkillers / chiropractors. To this argument, you should tell them to wear their backpack over both shoulders, like one is supposed to, and they shouldn’t have a problem.

You want your kid to grow up to be a personable, extroverted, well-functioning member of polite society, right? So why would you give him a personal entertainment device that all-but-guarantees he’ll spend every moment of his free time with his nose pointed at a tiny screen, drowning out the revelry, camaraderie, and general good-times that are taking place around him?

Got an hour between classes? iPad. Waiting for the shuttle to campus? iPad. Yes, your child could seclude themselves with a laptop — but not in as many places. Let’s see them try walking down the street watching the latest The Walking Dead on their laptop! It’s too cumbersome and awkward. (Just like The Walking Dead.)

Like any gadget, the iPad is a status symbol. Like any Apple gadget, it’s an expensive status symbol. It’s something we’ve been trained by society and lifestyle magazines to want, simply because it’s a luxury — and if we can be the first to have it, somehow, we “win.” To combat this, you can sit your kid down and, being very earnest, tell him that he doesn’t need things to be popular. Then explain to that laughing at you, when you’re trying to be serious, isn’t getting him closer to that iPad.

9. It’ll be old technology by the time you actually buy one

Apple is very consistent with its release schedule of devices. New models come out like clockwork, and our guess is that the iPad is not going to stray from this tried-and-true model. Specifically, an even newer version of the tablet is surely going to come out sometime in March or April.

That means the iPad your kid wants to own in August is already six months old and half-way through its lifecycle; what’s the point in buying this older model, when there’s a shiny new version on the horizon that your child will surely start eying greedily once it debuts?

10. They’ll probably want a laptop, too!

Yes. You heard that right. If you buy an iPad for your kid thinking, “Well, that’s that,” think again! Since there are situations in which a tablet just doesn’t cut it (see above), your child will come to realize that she definitely needs a full-fledged desktop or laptop (like the new MacBook Air, of course) for school, too. Whether it be for essay-writing, Internetting, game-playing, or entertainment-centering, you’re looking at a double-dose of device deployment. Never forget: There is no end to the amount of money a kid can or will ask for.

Share this with your circle of parents-on-a-budget, and enjoy the full article at DealNews.com.