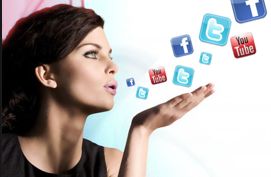 Most would agree, women talk more than men, so perhaps it won’t surprise you that social media is largely a female bastion  — It sometimes seems like a barren wasteland of men.

Turns out though, men have their own conversation style, so they tend to stay clustered with other men; just as women like friending and chatting with their female peers.

Perhaps this is just natural, and follows other trends; such as male’s history of earning higher wages than females, and more top journalists are male. Most top authors are male, too, and a handful of the top blogs are by men, but they don’t seem to work at staying visible like women often do.

Even book reviewers, I’ve recently learned, are more males than females. The New York Times, for example, in a 2010 statistic showed reviews by male authors totaled 524, and only 283 by females. Similar disparities exist for male/female writers at The Atlantic. 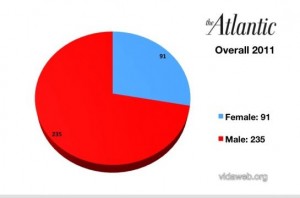 Pin Agency, a California marketing firm, calls this “Mars and Venus in the Blogosphere,” where Technorati ranked top blogs. No.1 was Arianna Huffington’s The Huffington Post (which is actually a liberal news website and not really a blog per se) as its most influential blog but only one other blog (Dooce) owned by a woman, was among the 30 top-earners.

On a lighter note, they quote:

There are more male bloggers because of the so-called male answer syndrome (MAS), which apparently is the tendency of dudes to always have an opinion, even in subjects that they know little or nothing about. “Guys seek thrills and speed. They go for the adrenalin rush. They get pumped by going higher, faster, farther than anyone else. They want lots of action and instant gratification. That’s also why guys like blogging – instant opinions, and lots of them. Men clearly have an urge to blog that women lack,” says The Globe and Mail columnist Margaret Wente.

And Pinterest?  Forget about finding men there. Over 80 percent of current users in the U.S. are female. In the U.K., the balance flips, with only 44 percent female, and the 66 percent of males who do use Pinterest are wealthier.

Foursquare.com has long been known as a man cave, with 80 percent male users, but the company says it is now trending to 60/40 male/female users.

Dig around if this gender divide is of interest to you. Now that we’re aware of this difference, we can aim to become more inclusive. We can write in a voice that appeals to both genders. Remember, too, on social media, that we have friends of both genders so our comments and updates should be of interest to both.