But I hate outlines!

No, we’re not talking an outline with numbers and letters and 13 levels of indention.  That’s linear stuff.  It’s so old school.

We’re talking about how to harness the power of our nonlinear brains, our creativity, our sparks of inspiration and our leaps of understanding.  How do you make sense of that on paper?

Most of you already know about mind maps.  It’s a way of taking notes and learning, but also a way of organizing a tsunami of thought (the brainstorm) that’s visual, colorful, and full of POW. 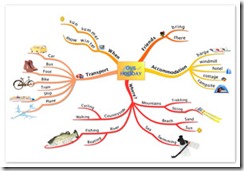 Tony Buzan camp up with Mind Mapping in the late 1960’s, and his resources are still the best around.   How to Draw a Mind Map.  A sampling of available tools.

A timeline is an invaluable thing for novelists as we often need to know exactly who is doing what in every, single scene, over the entire length of story-time.

In some genres, this is an incredibly complex task, as you’re juggling dozens of characters, each acting independently, over days or even years.

But even more important to the logic of a novel is to capture who KNOWS exactly what at each critical moment in time.  And often what a character thinks he or she knows isn’t even true.  So, based on events so far, what does he or she they know?

Now do that for each character in every scene AND for all the scenes that actually happen off stage.  Often characters are buy plotting against each other and the reader doesn’t see what’s happening, only the effects on down the line.

Well, the writer has to see what’s happening!  We’re not the god of our universe for nothing!

So, for this type of complexity, you need a timeline that allow you to capture overlapping data.

What makes this a creative way of outlining is the way you can visually see how things overlap while factoring in time.

IDEA:  You probably have a website (even if you call it a blog).  Create a page that is either hidden or secured by password (very easy to do in WordPress).  Insert the Simile Timeline widget on this page.  Then go to town!

BONUS:  You can use Timelines to try out ideas and see if things work!  It’s a clever way of inserting a new idea, and then tracking the ripple effect that it generates.

Are all events equally important?  Does every character and every scene hinge on each event or only some… or one?

Welcome to the concept of the Critical Path. 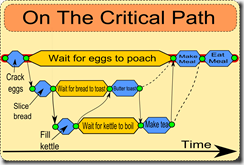 There are thousands of events in a novel, and yet they don’t all have the same importance (weight), and that’s important to novelists.

Related to the issue of importance is “what must happen in order of this event to occur?” and “what can happen now that this event is complete?”  This is the essence of cause an effect, action and reaction.

It’s these questions that lead you to PLOT.  Plus, in novels these events also intersect with character goals, motivations, conflict, backstory, and so on.

You need to know all this.  But more importantly, you need to play with all this.

Most software that is aimed at finding the Critical Path falls under the topic of Project Management, and uses Gantt charts to visual show tasks.

Nothing sucks the fun out of writing more than a Gantt Chart.  And I don’t necessarily recommend this type of project software because of the learning curve.  However, if charts and columns are your thing, go for it.  (A good place to start is to grab an Excel temple.)

Instead, I recommend using your non-technical set of markers, a sense of humor, and a piece of paper.

Here are some examples for inspiration:

The Plot of The Princess Bride via MyLiteraryQuest 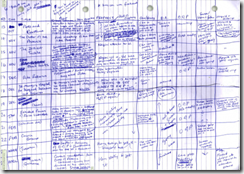 Finding your plot and critical path using a rug (with horizontal lines) and post-it notes via Jason Webster’s Blog. 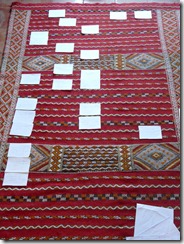 Mother Of All Visual and Creative Mapping Sources.

One thought on “3 Wildly Creative Outlines for Writers”