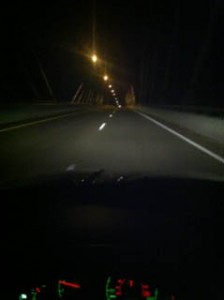 A week ago today, I set out on the road to blog and write a tour diary about indie record stores between Chicago, Illinois and San Antonio, Texas. One thing that I’ve learned about writing from the road is that no matter how well you plan, how carefully you coordinate, there is always an unknown out there that will skew all your plans.

Earlier in my writing career, when I wrote for radio and television, I’d go on assignment to Grand Forks Air Force Base to do stories on missile silos or to the U.S.S. Constellation to write and shoot video on air craft carrier life.

In every case, the unexpected forced me to deviate from the internal script I had in my head and improvise around some cancellation, problem or bad circumstance.

Learning the zen of that sort of flexibility wasn’t easy for me until I realized that I could write all my on-location problems into my stories and reports and make them assets instead of liabilities.

That skill works well no matter what kind of writing I’ve done–whether it’s web copy, scripts for public service announcements, or the latest draft of the book I’m writing about bizarre vinyl records. Embracing the chaos wasn’t something I learned overnight, but now that I know, I’ve used it practically as a personal writing cliche for many years.

Nowadays, instead of trying to be an expert on something, I’ll write my ignorance of a topic into the narrative and let myself–and the reader–discover new things rather than try to sound like I know something I don’t. When a writing assignment gets confusing or frustrating, I let the reader share my misery until it all gets worked out in the end.

Or doesn’t. Some writing assignments are like that, and I have no problem at all these days bringing the reader with me to whatever dead end or happy ending I discovered while tracking down the story.

Joe Wallace is the founding maniac behind Turntabling.net, a blog for people who love vinyl records. He is hard at work on two book projects at once, including WTF Records: The Turntabling Guide To Weird and Wonderful Vinyl. He has up to now avoided working with agents, but is making noises that an agent might just be a good idea after all. You can contact him for a variety of reasons at jwallace (at) turntabling (dot) net.