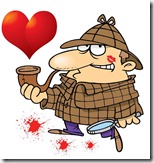 Readers steal a ride with your characters, except they have the superior position.  Their lives aren’t the ones being turned upside down.  And they have time to come to conclusions about what’s happened and (better yet) what’s likely to happen in the future.

Readers secretly decipher the mystery of your story just like a detective, and when they’ve figured it out, they declare, “By jove, I’ve got it!”  Bad News: now the reader’s bored.

And as a pacing genius, what do you do?

Break out The Game Changer.

Reveal something so startling that everything must be re-thought.  Twist the plot in such a way that for a few minutes the reader’s brain stutters.  Nothing will be the same.  It’s a holy sh*t moment.

The game is still afoot!

This isn’t about doing something random, something outrageous because you’re stuck.

No, this is about out-thinking the reader.  Being such a master of your story that you can use revelation in the most devastating way for your characters AND your readers.

No.  I do not mean a gimmick. I mean honest storytelling of the best kind.  No coincidences.  No tropes.  No Calvary rescue at the last minute.

The easiest Game Changing examples to spot are big plot twists, punches that reply on large-scale structure, involvement in many scenes, and stunning last-minute revelation.

But there are other Big Game Changers.

Simply put, a Game Changer is something you don’t see coming, but when it happens, the story trajectory and/or character’s “understanding” are radically changed.

In Clan of the Cave Bear by Jean M. Auel, there’s a moment when Ayla, the 5-year-old Cro-Magnum girl who’s rescued by the Neanderthals, realizes that all this hand waving and grunting is actually the language of her rescuers.

She’s been trying over and over to talk with them, telling them her name and asking questions, because her language is spoken, not realizing they’ve been trying to talk to her too.

This moment is the culmination of a many scenes and it changes everything for her.  After this, she can function in the clan.  And this is when we, the reader, understand how basic the differences are between us (and Ayla) and prehistoric man, while suddenly understanding what Ayla will be up against.

In The Lock Artist by Steve Hamilton, the narrator opens the novel by telling about his childhood.

“You may remember me.  Think back.  The summer of 1990.  I know that’s a while ago, but the wire services picked up the story and I was in every newspaper in the country.  Even if you didn’t read the story, you probably heard about me.  From one of your neighbors, somebody you worked with, or if you’re younger, from somebody at school.  They called me “the Miracle Boy.”

“In the years since then, what happened?  I grew up.  I came to believe in love at first sight.    I tried my hand at a few things, and if I was any good at it, that meant it had to be either totally useless or else totally against the law.  That goes a long way toward explaining why I’m wearing this stylish orange jumpsuit right now, and why I’ve been wearing it every single day for the past nine years.”

This is a huge game changer in how the reader experiences and understands the story.

So what do we know about Game Changers by looking at large-scale examples?

And because of all this…

They’re not just riveting, they’re the stuff of page turners.  The readers, in their role as sleuth, will now have to

And that leads us up to something that contributes even more to the success of stories: Scene-Level Game Changers.

Because readers get bored page by page.  If your scenes don’t have excellent pacing, readers aren’t going to wade through a couple hundred pages looking for a Big Game Changer.  Obvious, I know.

So taking those same lessons, let’s look on the scene level using Steve Hamilton’s A Cold Day in Paradise (Steve’s first book) as an example.

Pg 105  “But I don’t know, maybe somebody made a mistake.  Maybe the man they think is Rose isn’t really Rose.”

By opening up the possibility that someone else might be serving the life sentence of a murderer named Rose, a man who’s currently in prison for killing the protagonist’s partner, the reader must must re-think everything.

This is a good example of playing with Game Changers.  Is it true or not?  Has the game been changed or is this just a fear that will prove to be false?

And go read the first two chapters of Now You See Her by James Patterson & Michael Ledwidge to see a good example of a 1 to 2 punch. There’s a setup in one scene, and then the next scene has the reveling, scene-level Game Changer.

The plot has yet to start up.  At this point all you know is that this revelation changes what you know about the protagonist.  But leave it to Patterson and Ledwidge to tie this directly to the runaway plot.

So, do you have any Game Changers in your manuscript, big or small?

You could, you know….