Every story needs what I call, “Oh, Crap!” scenes.  These are the scenes where things do not go as planned.  Bad things happen.  Character are in trouble. 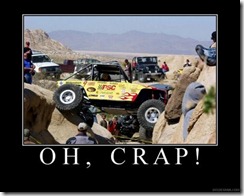 But specifically it means at least one character now, right-this-very-minute, knows it.  There was now, when the character did not know something was bad, and now there is after, the new now.

And I’m stating the obvious (as is sometimes my job), but we’re only talking about stuff that matters to the character and the plot, right? If the bad stuff doesn’t matter then it’s really not part of the story you’re telling.

Okay, back on point, which is why what happens in the now of your story has a huge effect on pacing.  And this is where many, many writers get hung up.

So here’s the secret.

When you have great pacing, every scene is really an “Oh, Crap!” scene.  Every scene has this element that something is happening now that will change the characters and story after.

No, we’re not talking bombs going off in every scene.  But we are talking about something, even if it’s small, making right now, this scene, matter. And most of the time, what matters is tied to a character and an emotion.

If something happens in a forest and no character is there to have an emotional reaction….  Yeah, you get what I’m saying.

Good pacing is about causing emotions and reactions in your characters and your readers.  While past events might generate sympathy or outrage or  a smile, everyone knows it’s over.

That phrase, “it’s already over,” is death to pacing.

It’s like saying, “But don’t worry about it, because there’s nothing you can do.  This is just informational.  Obviously we’ve gone on just fine, more or less.  We’ve survived, and now here we are, talking about the past.”

Now is the time that matters most in scenes.  Now is when every line of description, every reply, and ever action leads to an unknown.  And if that unknown is an “oh, crap!” moment, then you’ve created that pacing gold.  You will have given your reader and your character something that generates an emotion and a reaction in the now.

Instant pacing.  Your reader will intuitively know it’s not over at all.  Something is happening.  The only way to find out more is to keep turning pages.

Scenes Unfolding in The Now + Oh, Crap! = Scenes With Pacing

In Barbara Seranella’s No Offense Intended, she opens the story with Munch, her gritty heroine, so full of heart and originality.

Munch is an auto mechanic and ex-addict.  She’s working on a car when a man from her old life, someone she just calls Sleaze, shows up asking for a favor involving a baby.  Their conversation is difficult.  And Munch says no, only to find he’s left a key behind.

Beautiful writing.  Do yourself a favor and read Barbara’s books.  She does everything right.

One of those things is taking a person from the past and sharing backstory, but doing it in a scene where what’s happening right now is very important.  And if you asked Munch how she felt about it, she’s say, “Oh, crap!”

She’s just been played and she knows it.  There’s a baby involved, an innocent.  And she will have to make a decision (use the key or ignore it).  When?  Now.  The baby needs to be picked up now.

Here are a few pacing tips and tricks to your own scenes. Ask the following questions at the paragraph level,  the “unit of action” level, and the scene level.

Real Time: Questions of Scale (& The Point of Pain)

Sometimes it’s easier to look at pacing elements if you’re analyzing someone else’s scene.  Ask your critique partners if they’d like to trade scenes and brainstorm ideas for upping the “oh, crap!” factor.

In my next FictionZone column,  I’ll look at how great pacing causes an immediate reaction within your characters and story.

1. How to Be a Pacing Genius

2. Pacing and the Thirst for Something Fresh (Blood Optional)

3. You Can’t Look Away: Pacing & The Riveting Story

4. Shot Through the Heart: Threat, Consequences, and Emotions Equal Pacing

12. Pacing that Matters: It All Comes Down to Characters

13. Your True Opponent: Pacing’s Race to Outwit the Reader