Today we return to our “5 Questions With…” series, and we have with us a real treat–travel writer Rolf Potts. Read on to get some insights from someone who has been around the globe–and gotten paid to write about it! When you get done checking out the interview, be sure and head over to Rolf’s site where there is more advice for aspiring travel writers.                                 – Catherine 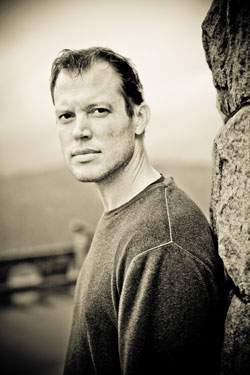 1. What is your background in writing and how did you become a travel writer?

I got involved in travel writing by trial and error — by getting out and traveling, writing, and keeping at it until I got good at both.  My first break came in 1998, when I was living in Korea and I started selling freelance travel essays to Salon.com.  Eventually they made me a biweekly travel columnist — and this let to other freelance work for venues like Conde Nast Traveler and National Geographic traveler.

By 2001 I’d gotten my first book contract, and “Vagabonding: An Uncommon Guide to the Art of Long-Term World Travel” was published by Villard/Random House in early 2003.  I’ve since written general journalism and literary criticism, but travel-writing continues to be my main line of work.

2. In your opinion, what are the biggest mistakes writers make when they attempt to craft a travel piece?

They forget to use the techniques of narrative — character, foreshadowing, scene, etc. — and instead just recount their experiences in chronological order.  In the age of blogs, nobody needs a bland, “travelogue” recounting of what happened to you on the road.  You need to tell a story — you need to guide the readers’ experience of your journey, and deliver them insight as well as information — preferably in a lively and engaging manner.

3. Can you share any savvy travel tips with readers?

Go slow.  Your experience of a place will differ according to the pace of your travels, and you’ll only get superficial impressions if you spend your journey rushing from place to place.  Rather than covering a huge amount of ground in a short amount of time, stick to one place and get to know it well — and get to know some people there.  Your stories will benefit exponentially.

4. What are the components of good travel writing?

Good travel writing involves well-told stories than inform, enlighten, and speak to universal themes.  That last point is especially important: If you can’t tie the specifics of your own experience in to something broader and more universally relevant, you might consider a rewrite.  Everyone can share what happened on their vacation — but savvy travel writers can tell the story in such a way that the audience can engage and relate.

5. What are the necessities for a travel writer in terms of gear?

Very little — and I’ve earned this advice, since I just spent six weeks traveling around the world with no luggage whatsoever (see: http://www.rtwblog.com/).  Seriously — bring a few tools to help you record the experience (notebook and pen, camera, perhaps a netbook), but don’t drag a bunch of gear with you.  It will only get in the way of the experience — and experience is what travel writing is about.

BIO: Rolf Potts has reported from more than sixty countries for the likes of National Geographic Traveler, the New York Times Magazine, Slate.com, Conde Nast Traveler, Outside, The Believer, The Guardian (U.K.), National Public Radio, and the Travel Channel. A veteran travel columnist for the likes of Salon.com and World Hum, his adventures have taken him across six continents, and include piloting a fishing boat 900 miles down the Laotian Mekong, hitchhiking across Eastern Europe, traversing Israel on foot, bicycling across Burma, and driving a Land Rover from Sunnyvale, California to Ushuaia, Argentina.

Potts is perhaps best known for promoting the ethic of independent travel, and his book on the subject, Vagabonding: An Uncommon Guide to the Art of Long-Term World Travel (Random House, 2003), has been through eleven printings and translated into several foreign languages. His newest book, Marco Polo Didn’t Go There: Stories and Revelations From One Decade as a Postmodern Travel Writer (Travelers’ Tales, 2008), won a 2009 Lowell Thomas Award from the Society of American Travel Writers, and became the first American-authored book to win Italy’s prestigious Chatwin Prize for travel writing.

Rolf’s essays have appeared in over twenty literary anthologies, and sixteen of his stories have been short-listed for The Best American Travel Writing, including “Storming ‘The Beach,’” which Bill Bryson chose as a main selection in 2000, and “Tantric Sex for Dilettantes,” which Tim Cahill selected in 2006. His writing for National Geographic Traveler, Slate.com, Lonely Planet, Outside and Travelers’ Tales garnered him Lowell Thomas Awards in 2003, 2004, 2006, 2007 and 2009; and he’s been cited as an expert on independent travel by publications around the world, from National Geographic Adventure, to TIME Asia, to Italy’s La Stampa daily, to the Australian Financial Review, to the Russian edition of Newsweek.

Though he rarely stays in one place for more than a few weeks or months, Potts feels somewhat at home in Bangkok, Cairo, Pusan, New Orleans, and north-central Kansas, where he keeps a small farmhouse on 30 acres near his family. Each July he can be found in France, where he is the summer writer-in-residence at the Paris American Academy.