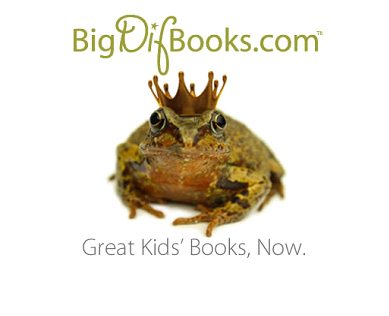 You may have noticed that BigDif is one of our sponsors over here at Freelance-Zone. Part of our committment to readers is that we provide you with more information about those who advertise on our site so that you can decide for yourself if the product or service is something that might be beneficial to you.

Today we have with us Tom Watson–head of BigDif. He’s going to share some of the types of books that they publish over at their company so that you can get a feel for if this might be a good route for you to go if you are a budding chidren’s book author…or if you know someone who is…

One of the things I really like about what we’re trying to do at this newfangled publishing company is give authors a chance to publish stories that traditional publishers just would be too wary to give a shot.  We make the books available digitally in our on-line e-reader.  And they can be printed at home.  We have about 40 books available now and each one stands on its own in different ways.  Here are some of my personal favorites:

Stick Dog Wants a Hamburger is one of our favorite books. It’s written and illustrated by Melissa Phillips. It’s longer form, probably 6,000 or 7,000 words, has a clever voice and here’s what I like the best:  The author-illustrator makes a real point of telling the reader she can’t draw. The whole idea that she’s up-front about it is funny the way she pulls it off.  Stick Dog’s name comes from the drawing.  You know, like how kids – and adults – draw stick people?  She draws stick dogs and writes about them.

The Night Before is written and illustrated by Annie Harmon who lives in Texas….

Annie is an award-winning illustrator and you can really tell.  The illustrations in the story really jump off the page.  It’s a suspense story between it a boy and dragon.  The boy thinks he’s being stalked.  In the end, the dragon is just having fun and trying to make a friend.  Annie was one of the first authors to really take up our idea and give it a shot.  We’re proud to have her work up.

Kena Sosa has written for numerous magazines and authored a travel book on Mexico City.  She wrote a book about her brother when she was younger and I really like it. And I like how it gives an early glance into a professional writer’s talents. Her book, My Brother, the Six-Year-old Zookeeper is the tale of her brother’s animal exploits. It turns out he’s real good at catching animals – but not so great at caring for them. The cut-and-paste illustrations really pop.  We’re going to see a bunch of cool stuff from Kena, I think.

Mike Winn is an art teacher in the Chicago Public School system.  And I think he’s the only person in the world who could pull off one of my favorite books at the site:  The Terrible Space Taco that Terrorized Texas. As you can probably guess by the title, this is a creature that is pretty weird – and must be stopped.  Mike does these great watercolor illustrations to go along with the story.  The ending is a kick.  Let’s just say after the creature is destroyed, there’s plenty of food around for the citizens to eat.

Interested in learning more about BigDif? See what the basics are in terms of writing a book for them and learn mor about how to get started.

2 thoughts on “A BigDif Book Sampler”