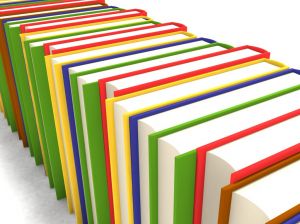 Strange things are going on in the e-book industry. Amazon had been selling Kindle versions of best-selling titles for what I call freelance e-book prices–9.99 per download–which could be seen as a great equalizer for the whole industry, or a potential game changer in the wrong direction for anybody interested in marketing their own e-books.

After all, if you can get a Stephen King downloadable book for a tenner, why should Joe Blow Unknown be able to charge the same amount for HIS book about writing and get away with it? Or so the logic goes. I don’t subscribe to that concept myself, I think it’s more about effective marketing and having a good product.

But that’s not the point.

Amazon got into a little shouting match with publishers MacMillan and now Rupert Murdoch’s HarperCollins, who both demand Amazon stop selling their Kindle titles for 9.99.
For better or worse, the giants still want you to pay the cover price for something you can’t hold in your hand…OR sell/trade to a secondhand bookshop.

That’s good news for writers who want to turn a profit. After all, what is your book really worth? The hours invested in writing, editing, and marketing are (usually) not paid for on a proportional level unless you’re working with a lucrative contract.

For readers, the idea of paying $20 for a bestseller you can’t hold in your hands is counter-intuitive. iPhone apps are a couple of bucks apeice, MP3 albums are $9.99 in most cases. Books that don’t follow suit are likely to languish compared to their printed counterparts, or so it seems to me.

I predict the price wars will eventually fall on the side of standard pricing for downloads the same as music, more or less. But it may take a few years to get there. The real question for writers; how does that standardized pricing affect you as an e-book writer/marketer? And what happens to book contracts with the majors?

The book industry is going to have the same upheaval the music business saw, with artists taking control of their own product and savvy marketers ruling the market. If you want to see the future of publishing, go look at the indie music scene and take plenty of notes.

E-book writers and self-publishers may have to consider lower price points in the future unless they can package themselves as well as the majors. Same as the music industry. But the big publishing houses in turn are going to have less to offer “power writers” because of lower price points. How long will this take to shake out? Time will tell, but in spite of the potential for lower incomes at several levels of the industry, the power lies in the hands of the writer like never before. It’s just a matter of time before the industry catches up to that idea.