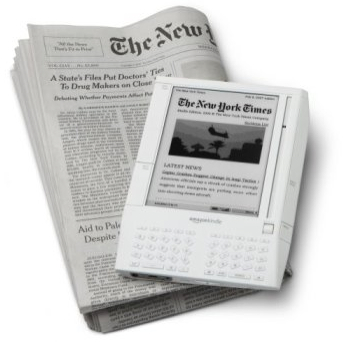 Wired reports an interesting development for the Amazon Kindle. Amazon has opened Kindle to third-party software developers to allow them to create apps for Kindle the way people create apps for the iPhone.

Did you know there’s a Kindle app for the iPhone? Wired speculates that Apple and Amazon are simpatico on this, giving one another a mutual benefit in the name of making sales. In Apple’s case, a Kindle app encourages more sales for the iPhone, in Amazon’s case it’s to sell more Kindle publications.

All this could mean very interesting things for the right freelancers. When Kindle apps that deliver web content start surfacing, does that web content come with a fee? Is the dawn of widespread fee-based content delivery via mobile the wave of the future for freelancing? Let’s put on our prognosticator’s hats for a moment and speculate:

–Kindle and Apple suddenly spark a high interest in delivering for-pay content via mobile. The “regular” web remains the same, but mobile users pay for convenience. The cost is spare change, just like some of the apps you can download now. Volume makes up for pricing.

–Regurgitator sites that scrape Craigslist content are threatened in the mobile environment by apps that do the aggregation for you. Many give up on mobile at their peril.

–Tablet and micro PCs become all the rage, driving the next wave of innovation in storage and performance.

–Traditional web browsing doesn’t go away completely, but a large chunk of the freelance money comes from developing mobile content. This will be called SEO 2.0.

–Old school SEO gets a “market correction” and the massive market for cheap content starts drying up on the traditional sites as clicks increasingly default to mobile content.

There’s so much more idle speculation I could indulge in here, but I’ll leave that for another post. This could happen over an arc of about three years, with the post-2012 environment being the real make-or-break time for those of us making money off the Internet currently.

Remember the big Internet crash ten years ago? Lots of freelancers lost their jobs in its wake. This time it won’t be a crash per se, but more of a shift in emphasis away from the Internet paradigms we’re looking at now and into mobile. Mark my words, kids…mobile could be the future. Are you in?