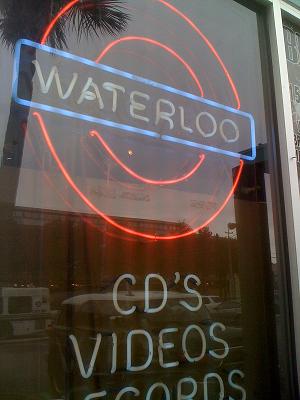 As I drive across America travel writing and blogging about my adventures, I keep seeing these little parables about the writing life. Today’s discovery came after a morning drive from Dallas to Austin, Texas. (The day before I was in Springfield, Missouri so I probably come off a bit punchy in these recent posts).

One of my travel blogging stops in Austin was Waterloo Records–a local fixture in the indie music scene for many years. Waterloo began its stay in its current location as one of several tenants–it shared the building with two other shops. But now, the others have moved out and it looks as though Waterloo Records is poised to take over the entire building. Not sure if that will happen, but it did get my gears turning. Operating a writing business successfully should happen much the way Waterloo’s success did.

Waterloo stayed in its present location for a long time. It only started expanding when it made sense to do so, and then it expanded in place rather than looking for a swank new location in some ultra-modern building across town. The lesson? Expand in a way that makes sense—and try to expand what you do while avoid alienating your existing clientele.

If Waterloo had moved to a different part of town it would, in some ways, have to start all over. It built a loyal fan base right where it sits today and by building “in place” it doesn’t run off those who rely on its convenient location. That’s much unlike Whole Foods, which was situated right across the street from Waterloo, and next door to the amazing Book People bookstore–another longtime Austin favorite haunt.

Whole Foods went to a different area and upset the routines of the people (all right, ME) who enjoyed the triple play Waterloo/Book People/Whole Foods experience. Whole Foods does quite well wherever it’s at, with a lot of name recognition and a big reputation to go along with it. But a struggling writer trying to alter their business model might not have the same luxury. Before making radical changes similar to a Whole Foods move, consider the consequences carefully. Ask yourself:

1. Why do I **NEED** to make this change?
2. Is this change in business direction/approach/etc. risky? How so?
3. Who benefits from these decisions? Who loses?
4. Are the losers in the deal still important to your overall business model? How do you appease them while sticking with your decision?
5. Is this change really necessary? Is there an alternative way to approach the situation?

Today Waterloo Records is just as amazing as it always was, but it’s much larger now thanks to some smart decisions. Changes to your writing career should be given the same kind of consideration.