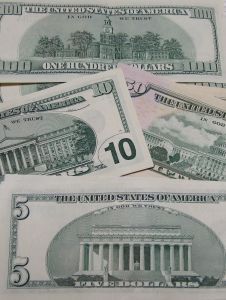 Yolander Prinzel is a finance and insurance writer/ ghostwriter. Her clients include The Savings Bank Life Insurance Company, Foresight Publishing, LifeTips and her own politically incorrect finance blog, The BIG Little Finance Blog. She also has a snarky community blog for freelance writers called Freelance Writerville

I’m sure you’ll have no problem. But what if you took that five spot and tried to buy something worth $6, we’ll wait…oh, you’re back—hey, why do you still have that five? Oh, they wouldn’t let you buy $6 worth of merchandise with $5? Well if you invest that $5 for 2 years in an account or investment earning 5% a year, that $5 will turn in to $6—let’s see them turn you down then.

This concept of the time value of money may not seem important to you right now, but if you are writing for residual sites where you earn “cash per click,” it’s a concept you really need to learn. Why? Because you invest your time and talent on projects that—as your career progresses–could lose value on your money.

Let’s take a real example. After visiting several anonymous residual site freelance writers’ blogs, I found one who had received a $177.00 residual payment in July from Ehow. After looking at his profile, I found that he had written 150 articles in order to get that $177 residual payment. If this writer had charged just $75 for these 400 word, well-researched articles, he would have been paid $11,250 for them.

Let’s take this a little further and say, since he didn’t need that $11,250 (if he did, he would not have the articles on residual sites right now) that he invested it in a CD earning just 5% for 5 years. At the end of the 5 years, his $11,250 would have grown to $14,020. If he put the money into an IRA with tax-deferred growth, it would have earned even more. Or maybe he has some debt to pay off.

In order to make the amount of money through residual payments that he could make through charging upfront and investing the money, he has to make sure he keeps his traffic up and that residuals site stays in business and doesn’t change their payment terms for over 6.5 years—and even then, that represents another 1.5 years that the money could be invested and earning interest.

That means he still will not have realized the full potential of the future value of his money. If he pays off debt and reduces his mortgage, he stands to gain even more and it would be almost impossible for the residuals site to ever get him the amount of money in those residuals that would make up for the interest he pays out of pocket on his debt.

Oh, and one last morbid thought—who does the host site pay his residuals to if he dies tomorrow? I’m pretty sure you don’t get to name a beneficiary on those residual sites….