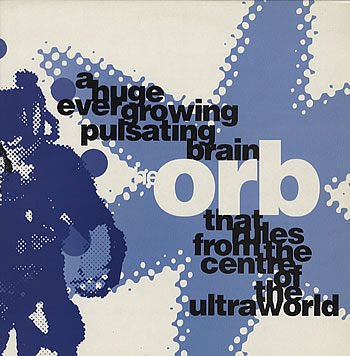 I know EXACTLY what you are thinking. What does this UK dancefloor classic have to do with freelance writing? Funny you should ask…Alex Patterson is the mad genius behind The Orb, which releases trippy, quirk-laden music. Patterson never releases his musical projects without collaborating with someone else–I’m not sure why, but there just doesn’t seem to be a solo album in Patterson’s future, ever.

Fans of The Orb know what they are getting, more or less, every time they purchase a new CD. Naturally there are those who feel The Orb’s best days are behind them (after all, they’ve been at this game a long time now) but Patterson still keeps making music and much of it is still very, very good.

What in the WORLD can a freelancer learn from Alex Patterson?

For a start, let’s talk about consistency. When you purchase an Orb CD, you know you’re getting something left-of-center, spacey, and there’s a particular sound that may be often imitated, but never duplicated. That consistent delivery of a particular musical product is what keeps The Orb fans coming back for more. Translate that into freelance terms and what do you get?

I like to be The Orb to my freelance clients and editors in one very important way. I am consistently on time, I consistently respond quickly to requests for revisions or alterations, and I try to make my submissions as hassle-free as possible. That means ALWAYS spell-checking and reviewing one last time about three times before I hit “Send”, that means pointing out the obvious for a poor pre-coffee editor–as in “Dear Editor, I’ve included the article as a Word 2003-2007 compatible document as an attachment.”

I tell the editor everything they need to know, and brace myself to repeat all that in another e-mail when they ask a follow-up question. I also like to anticipate my editors frustrations with constantly shifting editorial needs by turning in my work a day early whenever possible, especially if I am writing for a publication for the first time.

Here’s one of my secrets to making an editor happy. If there is a Monday deadline, I turn the piece in on SUNDAY. When they show up to the office on Monday, it’s already sitting there waiting for them. That sigh of relief they give over having one less thing to bother with on a Monday? That is PRICELESS.

Like The Orb, I try to give that sort of service on every single job to make myself stand out just a little bit from the rest of the pack. There are plenty of ambient/experimental dancefloor acts out there, but only one of them has the guts to name a release “A Huge Ever Growing Brain That Rules From The Center of the Underworld”. While that’s probably never going to translate in the freelance arena, you can certainly gain an editor’s admiration just as surely if you WERE a band who titled releases as such, just by remembering to be consistently good to your editor.

I know, this whole Orb tie-in was a HUGE stretch….but I couldn’t resist. Doesn’t that headline make you wonder WTF? Mission accomplished…