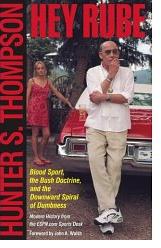 Hunter Thompson may be gone, but he is definitely not forgotten. His final book, Hey Rube, is a collection of essays from his ESPN column, but don’t be fooled into thinking this is a book strictly about sports. He used his column as a springboard into a great many topics including his political views, ideas on sex, and the creation of the infamous sport “Shotgun Golf”.

Thompson is best known as an author, but digging deeper into his body of work you’ll find that he was a freelancer with major credits–The Nation, Rolling Stone, and a big variety of others. Thompson is what many would consider to be a unreliable flake, an unemployable liability to any editor unfortunate enough to have hired him. Thompson frequently blew deadlines for nation-wide magazines and missed the point of his assignments. His most important book–Fear and Loathing in Las Vegas, was the result of a horribly botched freelance gig for a major sports publication. Thompson was assigned to bring back some captions on a race and turned in literally thousands of words in commentary instead. Incidents like these did not keep him from getting work. Amazingly, he kept getting high-paying assignments. Thompson was damn near bulletproof.

He was a force of nature, a contradictory whirlwind of massive hubris and self-doubt. As a survivor in the biz, he is a true hero–he somehow managed to overcome every career-ending disaster and bounce back with even larger assignments. There will be more books by Hunter Thompson to be sure–his estate promises several more collections of unpublished material– but this is the final one he put together under his own steam with intent to publish.